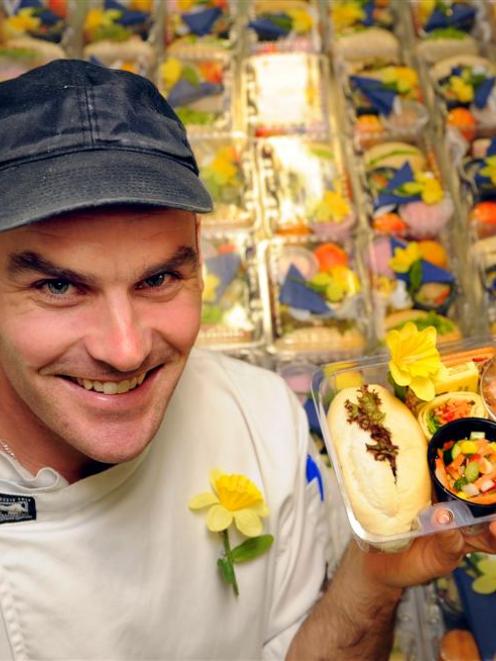 Ross Home food services manager Paul Robertson with some of 470 packed lunches distributed by Taieri Gorge Railway staff to rest-homes in the city yesterday after 500 pre-booked excursion passengers did not turn up when the Sapphire Princess cruise liner bypassed Dunedin because of forecast bad weather. Photo by Stephen Jaquiery.
The last, and biggest, cruise ship of the season bypassed Dunedin yesterday, a parting blow for local businesses which had otherwise enjoyed a bumper season.

The 117,910-tonne Sapphire Princess had made good time since leaving Hobart on Monday, but was forced to cancel its Dunedin call because of bad weather forecast for coastal Otago, Tapley Swift shipping agent David McLean, from Dunedin, said.

Forecast winds of more than 140kmh forced Sapphire Princess to bypass the harbour for fear it might not be able to leave yesterday at 5pm, he said.

The ship's next port, and only other New Zealand stop, was Auckland and the Dunedin bypass was necessary to maintain enough speed to ensure its 2600 passengers disembarked at their final port, Los Angeles, on time, Mr McLean said.

At 18 storeys high and 290m long, Sapphire Princess was the largest of 39 cruisers to visit Port Chalmers and Dunedin this year. The visit was to be its eighth this season. Crystal Serenity, with 970 passengers on board, was unable to enter the harbour this season because of high winds
in February. Two other cruise ships spent an extra night in port because of February's high winds.

That figure included 500 pre-booked lunch-time excursions, the cancellation of excursions open to the general public and loss of sales from souvenirs at the Railway Station shop.

About 470 packed lunches prepared for train passengers on Monday night were distributed to Ross Home, Montecillo Veterans Home and Hospital and Little Sisters of the Poor by Taieri Gorge Railway staff yesterday morning.

"There is no doubt this is a big blow to Dunedin's economy. There is a lot of money not coming in to Dunedin as a result, but it's just bad luck. You can't help the weather,'' Mr Bond said.

Other tourism operators and businesses in Dunedin's city centre also lost out financially. Tourism Dunedin general manager Hamish Saxton said it was unfortunate at the end of what had otherwise been a "fantastic'' cruise season for Dunedin.

He was confident the forecast benefit to the region of $13 million this year - up from $9 million in the 2006-07 cruise season - would be met.

And the benefits would continue, with 59 cruise ships scheduled to stop in Dunedin next year, he said.