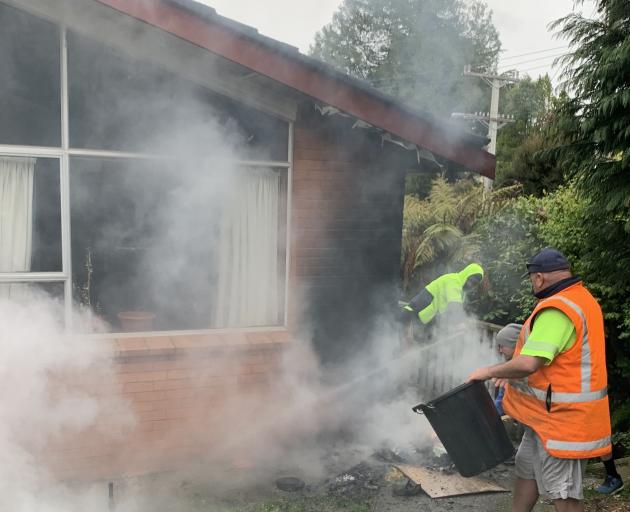 Members of the public David Thode and Jason Rosie work to bring a blaze under control that was threatening a home in Taieri Rd, Wakari, yesterday. PHOTO: GEOFF BELL
The efforts of members of the public to help put out a blaze near a Dunedin home probably saved it from destruction.

A fire broke out in a wheelie-bin in the backyard of a home in Taieri Rd, Wakari, yesterday morning and was brought under control by passersby, before emergency services arrived.

Geoff Bell, of Mosgiel, said he was driving through Wakari when he saw smoke billowing from a property in Taieri Rd.

"As I drove past I saw a big flash of orange and red.

"I could see it was no barbecue fire ... It was something that was escalating pretty quick."

He pulled over and helped other members of the public ensure the home owner was safe.

"If those guys hadn’t shown up I don’t know if those people would still have a house."

When they started fighting the fire, the flames were up around the roof, which had started to catch fire.

"If it was not a brick house, I don’t think it would still be standing," Mr Bell said.

Mr Thode said he and Mr Rosie were passing by when they saw the fire, turned their work truck around and grabbed a couple of hoses from a neighbouring property.

The fire, which was in a wheelie-bin in the garden, was quickly spreading to the house.

They fought the blaze for about 10 minutes before firefighters arrived.

"We pulled the wheelie-bin away from the house ... got buckets and hoses and got it under control," he said.

"It wasn’t far away from being quite tragic, and losing probably a lot, so we just jumped on to it," Mr Thode said.

appliances from Roslyn and Dunedin attended.

"It was reported by passersby, so good on them," she said.