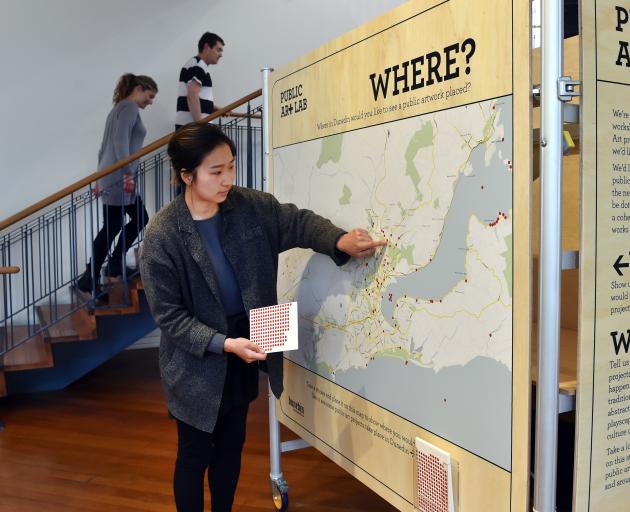 Dunedin Public Art Gallery customer liaison officer Dana Lee looks at a map on which the public can pinpoint where they would prefer public art to be sited in Dunedin. PHOTO: PETER MCINTOSH
Suggestions on Dunedin's direction in public art are already coming in as the Dunedin City Council gets ready to launch its public art labs.

Those suggestions include art that celebrates walking, cycling and public transport on an arterial route used by cars, or a ``symbiosis between the city and the ocean''.

Sites where the public would prefer art to be placed include the middle of the Steamer Basin in Otago Harbour.

The suggestions have been attached to one of two portable ``public art labs'' developed to get feedback from residents on what sort of public art they would like to see in the city and where it should go.

Each lab has a large map of Dunedin and people are encouraged to put stickers on locations where they would like to see works installed and fill in cards with their thoughts on what art they would like.

The facilities also feature books, films and photographs that give examples of visionary and successful public art projects from New Zealand and throughout the world.

Including the likes of Chicago's Cloud Gate and Len Lye's New Plymouth Wind Wand, they are provided to inspire the community to have their say.

Dunedin Public Art Gallery director Cam McCracken said there would be a series of steps before the next public work of art was commissioned, and the lab was the first.

He said Dunedin people were ``very sophisticated'' in terms of art and feedback so far had reflected that.

Delivering a new public art framework was one of the 10 action points contained in Ara Toi arts and culture strategy.

Mr McCracken said the feedback would help formulate ideas for five works to be installed over the next 10 years.

The first lab will be officially launched at the art gallery on Saturday. The second will be at the Mosgiel Library late this month, and will move to different community spaces throughout the city to ensure everyone has a chance to have their say.

In 2016, the council indicated it was ready to get back into funding public art, after slashing the budget in 2012 and putting on hold any new works while its policy was reviewed.