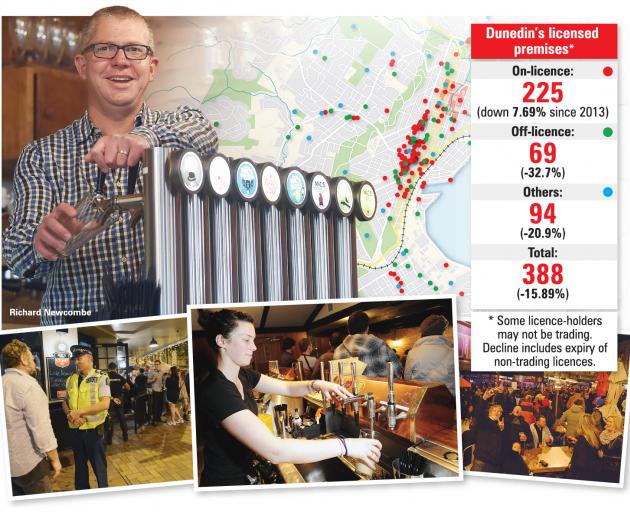 Dunedin’s bars and clubs are in the spotlight like never before, as officials take a tougher line on policing the city’s alcohol industry. But do new rules risk killing off the city’s nightlife? In the final of a three-part alcohol series, Chris Morris reports.

First the diners, then the drinkers and the dancers, as restaurants, bars and clubs hum with the energy of a night out.

The epicentre is the Octagon, where thousands of people descend on a busy night, jamming the venues, and the footpaths, until the early hours.

And, every so often, trouble flares — a push, a punch or something worse, drawing the attention of door staff and police.

But it is trouble of a different kind that sections of Dunedin’s hospitality industry now see looming on the horizon.

Those spoken to by ODT Insight fear a tougher approach to liquor licensing, and new rules coming when the city’s local alcohol policy is finally introduced, will have unintended consequences.

Consequences like delivering a damaging blow to the city’s nightlife, or encouraging more uncontrolled parties in previously quiet parts of the city.

Dunedin bar owner Richard Newcombe — the director of Dunedin Hospitality Ltd, owner of Mac’s Brew Bar and Di Lusso — said he was among those who "absolutely" had concerns.

As spokesman for the "Save Dunedin’s Nightlife" campaign, launched in 2014, Mr Newcombe had been an outspoken critic of the Dunedin City Council’s early draft local alcohol policy.

The early draft’s "draconian"  proposals, which included requiring bars to close outdoor areas at 11pm, no shots after midnight and a one-way door policy from 1am, had prompted "overwhelming opposition".

He was pleased changes had since been made, but remained concerned a tougher approach could still hurt the bars the city’s nightlife depended on.

And, as an example of what could go wrong, he pointed to one of Australia’s biggest cities — Sydney — where tough new "lockout" laws were introduced in 2014.

The new rules — including a 1.30am one-way door policy and a 3am "last drinks" rule — had cut the number of people on the streets in Sydney’s CBD and Kings Cross nightlife hot spots, and reduced associated levels of violence.

In Kings Cross, a City of Sydney survey had found foot traffic was down 58%, while incidents of anti-social behaviour had halved, the Sydney Morning Herald reported.

But that had come at a cost for  Sydney’s nightlife venues, Australian entrepreneur Matt Barrie wrote in a scathing opinion piece earlier this year.

Since 2012, the combination of increasingly tough regulations, culminating in lockout laws, had helped drive 42 bars, clubs and small businesses out of business, he wrote in the Guardian.

He cited the sign left outside on closed venue, which read: "NSW [New South Wales] lockout laws cost good people their jobs and decimated a once great and vibrant suburb."

It was a concern echoed by New Zealand actor and Hollywood star Sam Neill, who last month said Sydney’s controversial new laws had turned the city into a "pointless place",  The New Zealand Herald reported.

"I’m grumpy because Sydney used to be such a vibrant and exciting place in the late ’70s and early ’80s.

"There was an extraordinary culture but the vibrancy has been sucked out of the place," he said.

And similar concerns were now being voiced in other New Zealand cities, including the capital, Wellington, where sections of the industry feared a police push to introduce similar laws.

In Christchurch, where parts of the city faced a 1am closing rule, sections of the industry worried the change would be a death blow that risked "killing the city", the Herald reported.

• In Dunedin, the proposals contained in the city’s draft local alcohol policy had been blamed by one bar owner for killing his businesses.

Rob Dale pointed the finger at the policy after the closure of three venues — Capone, Boogie  Nites and Urban Factory — with the loss of 55 jobs.

Associates later claimed Mr Dale had left behind a string of debts totalling at least $240,000 — an allegation Mr Dale denied — but other businesses had also been affected by the tougher approach to liquor licensing in Dunedin.

That included South Dunedin soft drinks company Wests, stripped of its off-licence earlier this year and also live entertainment venue Sammy’s, which lost its on-licence after a string of problems involving its owner, Sam Chin.

Their closures were blamed on economics, but both were purchased by the University of Otago — prompting suggestions, since denied, the institution was trying to buy-up alcohol trouble spots.

Other popular Dunedin nightlife venues had since faced new scrutiny from liquor licensing officials, but survived, including Suburbia, Carousel and Pop Bar in the last year.

But some in the hospitality sector feared the tougher approach was just the start, and that more closures could follow, as officials pushed for a reduction in the number of licensed venues in the city.

Mr Newcombe said Sydney’s experience showed the approach did help reduce alcohol-related violence, but at the expense of hospitality businesses and the jobs and vibrancy they supported.

And, by following in Sydney’s footsteps, Dunedin could also risk transferring alcohol-related problems from tightly-regulated bars into the uncontrolled world of suburban parties, he warned.

"The people who are continuing to drink after those times — what are they going to do now? Are they just going to go home to bed? I suspect not."

The hospitality industry depended on a safe environment to attract customers and stay within the law, or else face sanctions including fines and the temporary loss of a licence, he said.

A flat party had no such controls, and the tougher approach to licensed venues risked pushing more people into that less safe environment, he said.

"How many times have you heard about someone drinking so much that they choke on their own vomit and die in a bar? That just doesn’t happen. But it happens in people’s flats.

"If they keep going down this street ... you’ll see a change when there’s less bars and more parties at home and more balconies collapsing," he said.

• Dunedin City Council figures suggested that change was already under way, as the number of alcohol licences of all types in the city had dropped since the new legislation was introduced in 2012.

Officials cautioned against reading too much into the figures, which included the expiry of licenses issued to non-trading businesses.

DLC chairman Colin Weatherall also insisted the goal was not to reduce the number of venues in the city, although "probably there are, in some places, a few too many".

The city’s provisional LAP included a moratorium on most types of new bottle stores in North Dunedin, among other restrictions, but there was "no directive" on reducing the number of on-licence venues, he said.

University of Otago vice-chancellor Prof Harlene Hayne said there were too many off-licence outlets in North Dunedin.

Evidence of the link between alcohol availability and excessive drinking was "crystal clear".

However, the university had purchased the Gardies and Bowler pubs only after they were "no longer viable as profitable businesses", and welcomed the reopening of the Captain Cook Tavern as a responsibly-managed venue for students "to drink in a civilised and safe manner".

"This is exactly the kind of behaviour we want to encourage and we would support other venues that take responsibility for the safety of their patrons.

"What we do not support are liquor outlets that contribute to the dangerous consumption of alcohol."

Dunedin police alcohol harm reduction officer Sgt Ian Paulin said the number of bars in the city was driven by economics, and there was "absolutely no agenda" by police to try to close down venues.

That included North Dunedin, where the closure of student pubs had been driven by the changing patterns of student behaviour, not police, he said.

"It was the economy of the North Dunedin nightlife ... Every student bar that’s closed in the time I’ve been doing the job, that’s the reason behind it."

Public Health South medical officer of health Dr Keith Reid said the city’s reputation for hard-partying students could be viewed with nostalgia or as "a blight on the reputation of Dunedin".

Change was needed to tackle alcohol-related harm in the city, but Public Health South did not have a goal of reducing the number of bars and other premises, he said.

There were some "well-documented problems" with the concentration of bars in the Octagon, but no easy solutions, he said.

"We don’t have a target in mind. What we would like to see is a reduction in the consumption of alcohol ... and a shift towards more people drinking in a responsible and safer way."

He also questioned the use of Sydney as a case study for the faults of tighter regulation, pointing to separate reports that showed the measures were working as intended.

A review by the New South Wales government, published last month, found "grossly overcrowded, violent, noisy, and in places dirty" areas of Sydney’s CBD and Kings Cross had been "transformed into much safer, quieter and cleaner areas" by the new laws.

Foot traffic was down, affecting turnover and employment and forcing the closure of some businesses, but the new laws had "very much" helped reduce levels of violence, it found.

A separate study of crime statistics, also by the NSW government, reinforced the findings, pointing to a dramatic drop in the number of non-domestic assaults in Kings Cross (down 45.1%) and Sydney’s CBD (down 20.3%).

Mr Newcombe said it was the kind of argument Public Health South, in particular, rolled out against alcohol "at every turn".

"On the surface it’s kind of logical.

"But if you take it to its extreme, it says ‘if there is no alcohol, then you will have no alcohol-related harm, so let’s pretty much get rid of it entirely’."

Dr Reid denied that, saying harm-minimisation, not prohibition, was the aim.

"Is that anti-alcohol? Well, I can understand why people who make their living from selling alcohol might perceive it as so, but it’s not inherently anti-alcohol."

There is a kind of 'silo' attitude from those whose job it is to sell more. Of course people don't choke on their own vomit in a bar, often, but they may load up in a bar before proceeding elsewhere. Social responsibility needs to take account of the ongoing, consequential circumstances. It is not acceptable for citizens and police to be attacked in town. There is a lot going on that has nothing to do with drinking and the 'thousands' descending on the Octagon include theatregoers.

I don't know about Sydney, but the late seventies were the time of the 'Underbelly' criminal gangs around King's Cross.