There were jerseys that left the torso open to the elements, a jacket that could double as a sleeping bag and a host of inspirations ranging from dead parrots to passion at the iD International Emerging Designers Show judging day yesterday.

Emerging designers from around the world stepped into Dunedin's darkest room - the completely black Clarkson Studio at the Regent Theatre - and faced five judges to explain the often strange outfits that hung from their models. 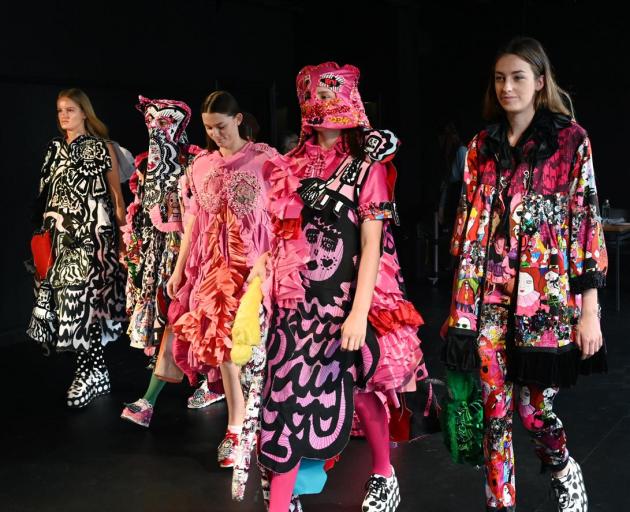 Models show off the designs of Manchester Metropolitan University graduate Rebecca Carrington at the iD International Emerging Designers Show judging day in Dunedin yesterday. Photo: Gerard O'Brien
Her collection ''The Story of Miss Ruby Ribbon'', was a celebration of her childhood, described through a fictional narrative telling the tale of a 21-year-old woman still enjoying playing with toys.

The result was a barely describable flood of images and patterns plastered colourfully across the models, sometimes fully enveloping them, head and all.

Otago Polytechnic graduate Phoebe Lee told the judges she wanted to merge her love of art and fashion, and her designs included a nymph motif she had originally painted by hand.

All emerging designers were questioned on their plans for the future, or asked which designer they would choose to work for if they could choose any one they wanted.

After a long day judging and a clearly passionate discussion about placings, Ms Carlson said the quality of designs was ''fantastic as usual''.

''This year we've got some quite clear winners, but the next level is so hard.''

Ms Carlson said the show would include unusual and unexpected colours, and the audience would see some interesting juxtapositions of fabrics.

''I think they're going to see some brilliant young talent.''