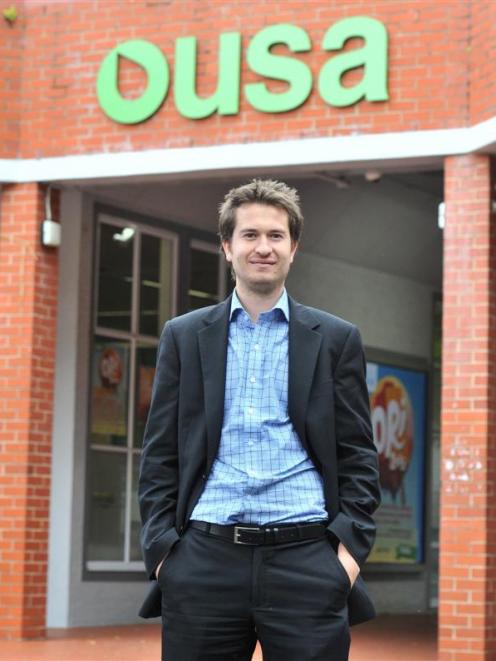 Otago University Students' Association president Paul Hunt hopes to build a sense of community among students in the city this year. Photo by Linda Robertson.
The Otago University Students' Association has come through a period of transformation and still faces some challenges in the coming year. President Paul Hunt speaks to ODT reporter Timothy Brown about his vision.

Try out a whole lot of different things and get involved with all the different clubs and societies which exist on campus OTAGO University Students' Association president Paul Hunt seems to have a singular focus on community.

The word comes up a lot in his conversation, but it is not simply rhetoric. He hopes his actions this year will help foster a long-term sense of community among the University of Otago's students.

''I think one of the big focuses for OUSA this year is investing in our clubs and societies,'' he says.

''Otago is the only university in Australasia where students predominate the city centre and student area, and clubs and societies significantly contribute to building that sense of collegiality and culture among the students.''

To that end the OUSA has this year allocated $70,000 for affiliated clubs and societies in addition to the $60,000 it gives them annually in grants.

''It's about ensuring the clubs and societies have the resource to achieve their aims but also to maintain their membership because quite often there's a lot of interest at the start of the year and that wanes as the year goes on,'' he said.

The OUSA also hoped to take a more prominent role in clubs and societies' management.

''If OUSA has more direct knowledge of what that [particular] club does, OUSA can act as a storage centre for a lot of information. Often clubs are dependent on a few strong individuals and once those individuals leave the university then the club is in a position where they are not sure what to do or where they are at.''

The reason for the push for stronger clubs was about fostering an inclusive community-like environment among students.

''We currently have fantastic events and that's what OUSA is known for,'' Mr Hunt said.

''But [we want to be] about contributing to students' lives and experiences on a more permanent and ongoing basis.''

The OUSA was strongly advocating joining one of the 122 affiliated clubs and societies on campus to get first-year students out of the ''bubble'' of college life, Mr Hunt said.

The OUSA was looking to amend policy so junior members, who were not yet students, could join clubs so ''that the university and OUSA have a great connection with the community''.

That sense of belonging to the wider community was an important reason behind the OUSA's bid to stamp out glass from its events.

''I wouldn't say it's totally glass-free but we basically minimise glass at any possible point,'' Mr Hunt said.

''That's a very basic way we have taken on board the community feedback and responded to ensure university students appreciate they are part of a wider community and not just the university campus.''

The OUSA wanted to take charge in promoting to students an attitude where they understood the need to be responsible members of the community.

The organisation recently came through a period of relative uncertainty.

''We are able to continue on a fairly similar scale as we were during compulsory student membership, which is good.''

However, the challenge had not been completely overcome as financial restrictions continued.

''We are operating in a tighter fiscal environment so achieving value for the money we spend will be a challenge for us and something we need to become aware of as the university comes under increasing fiscal pressure,'' he said.

This year, the OUSA also wanted to begin to address

pressures students might find themselves facing, though he recognised there was no ''silver bullet''.

''`Most Otago students are living away from home. That creates a whole lot of new pressures in their life which they may never have dealt with before and those, combined with a higher level of academic rigour, can create challenges.''

But while those challenges lay ahead for students and the OUSA, O Week provided an opportunity for everyone to let their hair down.

And Mr Hunt had a message for all students: ''Try out new things while you are at university. It's a time of exploration, so don't feel you have to go down one particular route, whether that's degree-wise or career-wise.

''Try out a whole lot of different things and get involved with all the different clubs and societies which exist on campus.

''Simply turning up to lectures and getting involved with clubs makes a big difference to one's experience on campus and ... generally once you have made that step you realise everyone is friendly and it is a very supportive environment.''