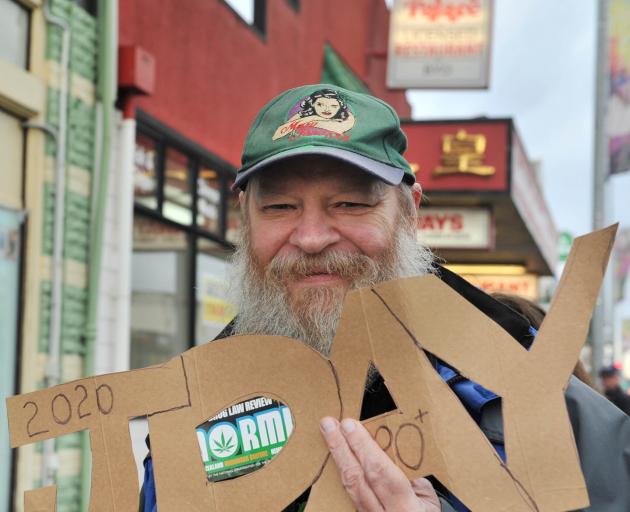 The annual protest has been held in Dunedin for more than 35 years, and long-time South Dunedin campaigner John Wilson hoped this year’s protest would be the last. Photo: Christine O'Connor
In a flip-flop move, a small bubble of Dunedin’s cannabis prohibition protesters used their annual day of protest to show support for the Government’s cannabis referendum which will take place later this year.

Only about four people gathered on the corner of King Edward St and McBride St today, between midday and 1pm, but they received plenty of support from passing cars.

Campaigner Jannette Saxby, of South Dunedin, said keeping the protest alive in Dunedin was unique this year because Justice Minister Andrew Little recently released the final draft bill and summary of policies that will be voted on in a yes/no vote at the general election on September 19.

“Politics continues towards the General Election, despite the Covid-19 situation, and the hope of long-time cannabis activists is that this opportunity for change won’t be swept away in our post pandemic period.”

The annual protest has been held in Dunedin for more than 35 years, and long-time South Dunedin campaigner John Wilson hoped this year’s protest would be the last.

“Some of us older generation have been protesting this for years. It’s time to make it legal and let us be.

“We have seen what social change can be done if we all realise that change needs to be made, and act on it as society.”

“As we look toward opportunities of economic development, this referendum gives Aotearoa/New Zealand an opportunity to establish an entirely new sector overnight, create jobs and ring-fence economic gains domesticity.”

“Dunedin will not stand for a long fight for law change on cannabis in Aotearoa/New Zealand.”

Legalized marijuana means the government can tax it. Which means more expensive dope for potheads. Maybe they haven't figured that out yet?

It'll mean more doped up drivers on the road, if this goes ahead. Doped up machine operators, workers, salespeople, babysitters, teachers, nurses, surgeons, builders, electricians... all legal of course. Hurrah!

Will companies have to pay to test their staff, and then pass the costs onto customers as always?

What about insurance claims? Will the rest of us have to pay in our premiums for the doped up drivers who'll kill kids on the road without even noticing?

Can a person be charged with rape (or even consent to sex at all) if high?

Legalized dope is a generous gravy train for the government, of course. That's why they want it legalized.

Much better to make profit from drugs themselves than have to put more cops on the streets. Instead we'll have a doped up population even more compliant than they are already (if that's even possible, considering the teddy bears in our windows that tell our neighbors we've happily bent over), not able to even think straight in the clouds of dope smoke we were dumb enough to vote in.