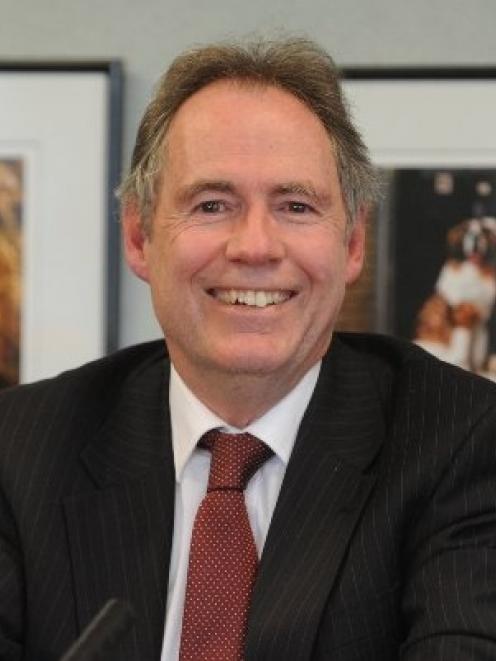 Jim Harland, chief executive of the Dunedin City Council, who is stepping down from the role next month. Photo by Peter McIntosh.
After more than a decade at the helm of the Dunedin City Council, chief executive Jim Harland is about to move on. He tells council reporter David Loughrey the projects completed in that time have made the city a better place, despite their cost.

After just under 11 years in the role, outgoing chief executive Jim Harland is clearly proud of what he achieved in charge of more than 680 staff at the Dunedin City Council.

With more than just a hint of emotion last week, Mr Harland looked back on his stint in Dunedin.

Mr Harland is known more for his reserve than, openly at least, his passion.

But that reserve may simply have covered what lay beneath, as for more than a decade, the council's only direct employee fought hard for what he believed the city required, despite the criticism his stance often attracted.

And while most saw an individual steeped in the minutiae of local government, there was always an alter ego with a fascination for speed through hobbies that involved both two- and four-wheeled vehicles, and piloting aircraft.

Mr Harland (56) confirmed his resignation in October, and will leave his post on January 21 to take a new role as the New Zealand Transport Agency's southern regional director, dividing his time between Dunedin, Christchurch and Wellington.

He will also remain a member of the council's Forsyth Barr Stadium project delivery team until the project's completion.

From his office window on the second floor of Dunedin's civic centre, the stadium can be clearly seen in the distance, and if there is one issue that has marked Mr Harland's time in the city, it has to be that project.

But more about that later.

Last week, it was the changes in the city in the last 10 years, changes he said had made Dunedin a better place to live, that he wanted to talk about.

Mr Harland said while the council had not had an involvement in all of them, together they made for important steps forward in Dunedin's development.

And the list, to be fair, is a long one.

Mr Harland began by pointing to the council's role in economic development, helping many businesses in the city, help the public often did not see.

He noted the council's donation of $1 million towards the endowment fund for the Dunedin City Chair in Entrepreneurship, matched by a government donation under the University of Otago's leading thinkers initiative.

The council had worked closely with the Upstart Business Incubator, and on Project Gateway, the joint initiative to encourage transtasman flights.

Moana Pool had been expanded and had a new gymnasium; the Otago Settlers Museum was being redeveloped and the Southern Water Treatment Plant had been completed, providing the city with A-grade water.

The Mt Grand raw water reservoir had increased water storage capability and the Green Island sewage outfall had been completed, as had the Tahuna outfall, with a secondary treatment plant planned, meaning the heavily polluted Tomahawk beach was now clean, and St Clair and St Kilda no longer had to be closed.

The motorway through Fairfield to the airport had been completed, with State Highway 88 realignment under way and Caversham Valley work planned.

The Dunedin Centre and town hall were being redeveloped; money was set aside for the Logan Park redevelopment and a redevelopment of the library was in the pipeline.

So why was that list of projects the information he most wanted to get across in his outgoing interview?"I think if you look at the city, and the council, and you ask yourself the question: `You do all this work, you build all these projects, but what happens?'."

What happened, Mr Harland said, was when people saw how success was measured, Dunedin came out near the top compared with other areas.

"That's because the community, in the broader sense, both private and public, are continuing to invest in things."

That investment, though, has come at a cost, to council ratepayers, at least.

Dunedin City Council debt is expected to rise to close to $350 million, as rates increase annually.

Asked if he thought the decisions the council had made in the last decade that had produced those results were the right decisions, Mr Harland said they were.

Dunedin's rates, compared with other centres, were still at the lower end of the spectrum, and were only 3.3% of household income for a median residential household in the city.

Mr Harland has been closely associated with two projects during his term as chief executive.

The first is the stadium.

Looking back on the stadium debate, Mr Harland said it was an issue that had "occupied my life since 2002".

While there has been recent good news for the project, with Sir Elton John booked to perform there, and the Academy of Sport to have a building attached to the north stand, Mr Harland was still circumspect.

"None of us will know how successful it will be until it is successful," he said.

"Having said that, the decisions the Carisbrook Stadium Trust, the project delivery team, and the Dunedin Venues Management Ltd have made are giving it the best chance for success."

Mr Harland said the stadium debate had brought out the best, and the worst, in the community.

He said there were people with genuinely held fears about issues like high council debt and rates.

"I guess all you can do is put forward the information as simply as you can.

"It was tested in the High Court, in the Court of Appeal ..."

The stadium was already fulfilling what had been expected in terms of the number of events to be held there.

There had been estimates of one major concert a year, several conferences, and community events.

"Those are on the go.

"What we said would happen is happening."

Asked if he felt the debate had become too personal, Mr Harland said debates about stadiums seemed to have become personal in every other city in which they were built.

"It's no different in that sense.

"Most people seem to accept we've got it, and are using their best endeavours to make it work.

"There are some who still can't accept it.

"There's not a lot you can do; just move on.

"The stadium is a dynamic thing. There are a lot of challenges ahead."

The second major project was the harbourside redevelopment, a plan to redevelop the Dunedin harbourside with apartments, bars, a hotel and tree-lined boulevards.

The proposal, described as a 50-year vision, was developed by the council and Port Otago's property investment subsidiary, Chalmers Properties Ltd, which owns much of the land.

A change of zoning was to have provided a platform for developers to move in and invest in the area, but while the plan change was approved, opposition from local businesses has resulted in the plan recently being much reduced.

Mr Harland was a sponsor of the redevelopment, and a member of the harbourside project control group in charge of the initiative.

Asked about the reduction in the scope of the project, he noted it was always a 50-year vision.

"The opportunity is still there for developers, for hotels, and associated uses.

"The wharf space; that part of the vision is intact.

"It would have been sad if the whole thing was kicked out - it hasn't been."

On business in the city, he said "smart" business may be the way of the future.

While Fisher and Paykel moved the manufacturing aspect of its business, with the loss of 430 jobs, it kept research and development staff, moving to the council's Wall Street mall offices.

"Fisher and Paykel took manufacturing away but kept the thinking part; they kept the intellectual part of the business.

"That, to me, is pointing to the way of the city in future."

There was news late in the year that production design and call centre staffing levels were expected to increase to about 180 people by the middle of 2011.

"The sort of cities that do well, like Wellington or San Francisco, nice cities, interesting architecture - the ability for people to get around easily - we're right up there in that context."

And he said the young entrepreneurs who at present left university and then left the city, in future might not have to.

"It's not necessarily about the number of jobs, it's about the value of jobs; we're getting higher up the food chain."

On a more personal note, Mr Harland said the council and its people had taken up the bulk of his time since he began in the role.

"I've put more time into this place than you do at home."

Asked what he would miss most, he said: "It's always the people; the spread of the job, the variety ..."

He said it was also pleasing to see the "bright young things" who were making their way through the ranks at the council, and the more senior staff who had stayed at the council, not a usual situation in such an organisation.

He had also been honoured to work in Shanghai and with the World Health Organisation, he said.

The role of staff in a local authority was based around a sense of service and stewardship, he said.

"I've encouraged people to think along those lines. I think there's a pretty good culture here."