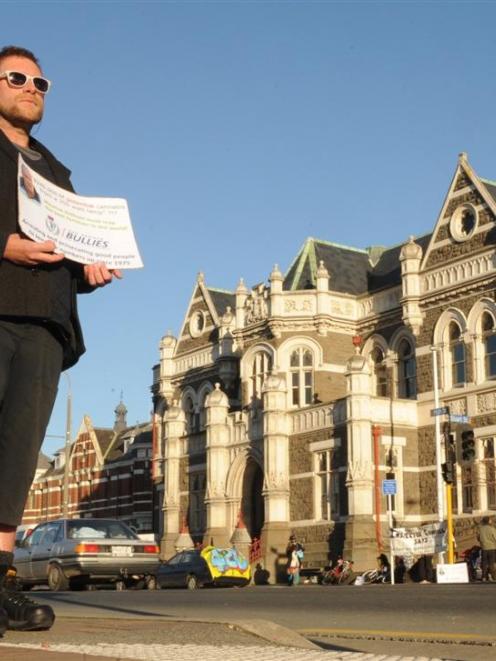 A man calling himself "Mr Grass" protests outside the Dunedin law courts building. Photos by Stephen Jaquiery.
Experts will be asked to estimate just how much cannabis a Dunedin pensioner may have been able to harvest from the 200 small plants growing in his bathroom last year.

Maurice David Didham (72) was to have been sentenced in the High Court at Dunedin yesterday after pleading guilty to cultivating cannabis and possessing 657g of dried cannabis for supply.

But Justice Geoffrey Venning, of Auckland, remanded him on bail and delayed the sentencing until August 3 so further information could be obtained on the potential yield from the young plants.

Police officers found the plants growing in soil in the bathroom of Didham's rented house in August last year. They were on a heat pad and underneath a single light with a reflector.

Didham contacted the Otago Daily Times last month to challenge the police figure, estimating the plants would produce about 600g in total, worth about $6000. 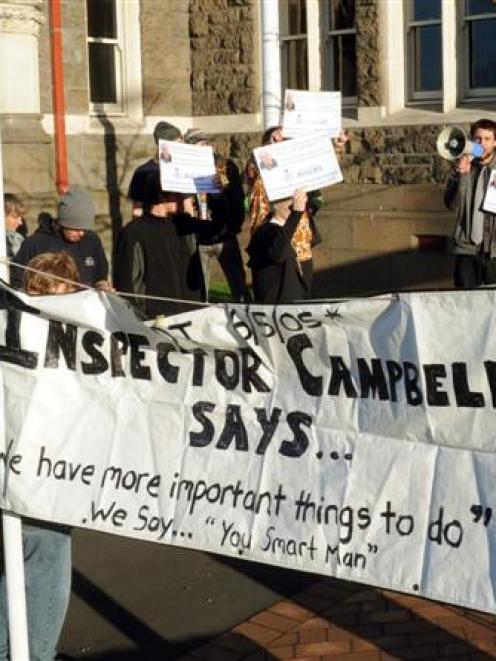 Cannabis law reformers call for a fair sentencing deal for cannabis-growing Dunedin pensioner Maurice Didham.
Didham's counsel, Helgi Henderson, yesterday said if no agreement on yield could be reached before August 3, it might be necessary to hold a disputed facts hearing on that day.

Appearing for the Crown, Richard Smith said the estimates were "so far apart", the Crown intended to havethe evidence reviewed.

Opinion would also be sought on whether 200 plants could be grown to full size in a small bathroom, Mr Smith said.

Justice Venning said the potential yield "may well have been overstated".

"If a realistic approach is taken by police, this may well be able to be resolved by August 3. I hope that is the case."

It was "unfortunate" the issue had not been raised in February, when Didham pleaded guilty to the charges, Justice Venning said.

After the hearing, cannabis law reformer Abe Gray said the remand was a "victory".

"This is success for the protesters and for Mr Didham. If we hadn't got involved, he might have been sent to prison for five years."

Mr Gray was one of about 20 people associated with the Otago University branch of the National Organisation for the Reform of Marijuana Laws (Norml) protesting outside the law courts building yesterday.

Lighting was the "limiting factor" for plant growth and Mr Gray said it would have been "impossible" for Didham to harvest $240,000 worth of cannabis from plants grown under a single 250W light bulb.

If the police "had stuck to the facts", Didham would have been appropriately sentenced in the district court, Mr Gray said.

"He is just an old guy, minding his own business, mostly. The police shouldn't be hyper-inflating potential yields so that people like him get sent to the High Court for sentencing."

Norml would ask two of its own experts - a professor of horticulture at Massey University and Dunedin-based drug policy analyst Dr Geoff Noller - to supply affidavits to the court, he said.