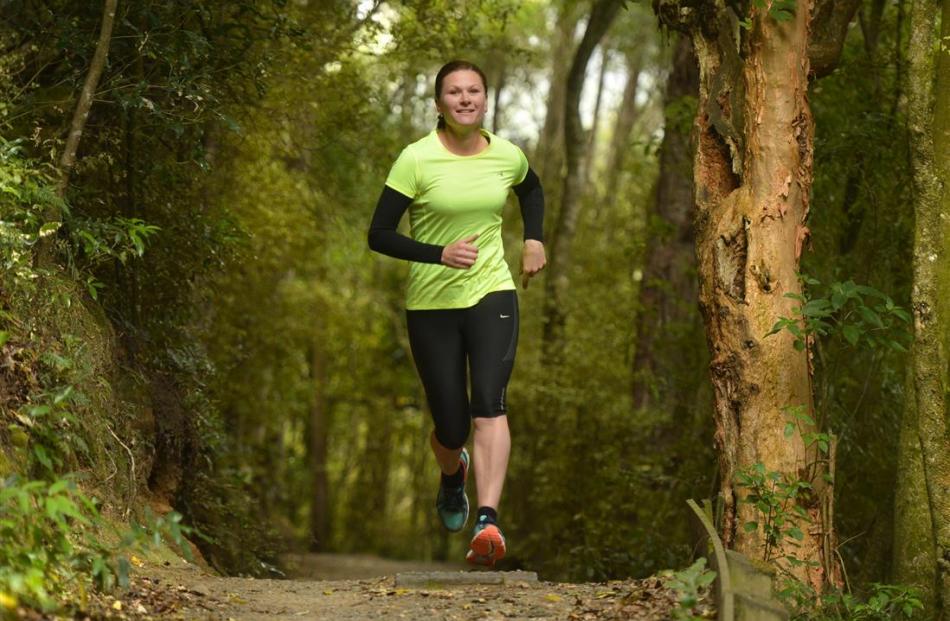 Megan Martin has been overwhelmed by the response to an organised run in Ross Creek following last week’s attack on a female runner. Photo by Stephen Jaquiery.

Ross Creek is expected to be teeming with joggers and walkers tomorrow evening who want to "reclaim'' the reserve after a young woman was sexually assaulted there last week.

The idea came from Dunedin TVNZ reporter Megan Martin, who has jogged in the Ross Creek reserve for years.

Ms Martin found out about the assault in the North Dunedin reserve early on Tuesday, while scrolling through her emails.

"And one of the first emails I read was the press release on what had happened up [at Ross Creek].''

Her first reaction was anger.

"I obviously felt a huge pity for the woman it happened to, but it was instant anger,'' she said.

"[I was angry] that some guy had come up here and attacked a runner who had every single right to be here at any time of the day or night, and tried to place fear in this place which we [enjoy].''

Ms Martin reported on the attack and posted the story on Facebook.

It got a big response, she said.

That gave her an idea.

"A couple of different people who didn't know each other said, ‘we should all do a run up [at Ross Creek]', and I had already thought about organising something, and I thought, ‘Yeah, why not? I'll set something up'.''

She set up a Facebook page - Claim the Creek - which has attracted more than 1300 "likes'' and dozens of comments.

Inspector Mel Aitken, of Dunedin, who is also a runner, has received a donation of 50 whistles on lanyards to hand out to women who ran alone, so they could whistle for help, if needed.

Victim Support Southern area manager David Charteris said the organisation would be "most grateful'' for any donations resulting from tomorrow's event.

Victim Support had not dealt directly with the woman who was assaulted, but the organisation had helped victims of similar attacks, he said.

Mr Charteris praised the idea of holding a Ross Creek run, saying it might help the community.

"That's a brilliant response to a negative situation,'' he said.

"Whenever a traumatic event happens to an individual, that always echoes out into the wider community.''

The outpouring of support on social media for the victim could also be healing, Mr Charteris said.

"People don't feel so alone in the trauma they're experiencing.

"When the community gets together to support an individual, we all benefit.''

Since the attack, Ms Martin said, she had heard some people suggesting the runner should not have been in the reserve at that time of night.

"That's not the question that I think we should be asking ourselves,'' she said.

"I think the question we should be asking ourselves is, ‘Why was that toe-rag up here at 9.15 and attacked her?'

"She has every right to be up here at midnight running if she wants to, and be able to do it safely.''

Fellow Ross Creek jogger Kahu Parmenter, who planned to go on the run, was angered and surprised by the assault.

"It never entered my mind that it would be an unsafe place [to run at night].''

She hoped tomorrow's event would send the message that women should not have to worry about being safe in public, even if they were in Ross Creek jogging alone at night.