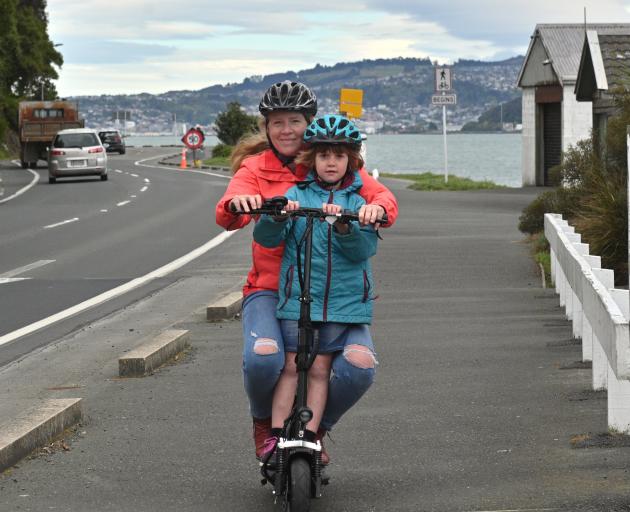 Lucy Goldsmith rides her electric scooter with daughter Freya Lester (6) on the Vauxhall to Macandrew Bay shared path, Dunedin. The section of Portobello Rd was formally opened yesterday. PHOTO: LINDA ROBERTSON
Creating a shared path for cyclists and pedestrians to safely enjoy views of Otago Harbour and raising and widening Portobello Rd are proving to be popular moves.

"I’ve never had so little backlash about roadworks, ever," Dunedin Mayor Aaron Hawkins said at yesterday’s official opening of the section between Vauxhall and Macandrew Bay.

The broad plan includes linking the city’s harbour communities with a shared path out to Taiaroa Head.

Work was first carried out between Portobello and Broad Bay and, yesterday, completion of the 4.4km second stage was celebrated.

The section between Vauxhall and Macandrew Bay has been in use, but the formal opening was delayed until yesterday because of restrictions on gatherings due to Covid-19.

Work has also started on the section from Broad Bay to Company Bay.

Mr Hawkins said an early catalyst for the project was a push to have a footpath wide enough for two prams side by side.

Since then, cyclists and emergency services had provided impetus.

The path enabled people to use a greater range of transport choices, Mr Hawkins said.

"We’ve had a large increase in people using this facility.

"It was an especially popular asset during the lockdown."

Lucy Goldsmith, an administrator at Dunedin Hospital, had been using the pathway to get to work on her electric scooter.

The trip took her about 30 minutes.

"It’s great to be close to the water," Ms Goldsmith said.

Mr Hawkins said the work made road users much safer.

He acknowledged some sacrifices had been made for the good of the greater community.

"In this case, we relented," Mr Ellison said.

"We think it’s a fantastic asset and the harbour is the heart of the city."

The section features a new seawall, raised boardwalks, timber retaining walls, seats and steps down to the harbour.

The NZ Transport Agency has stated the Vauxhall to Macandrew Bay path provides the greatest safety benefits of any section of the Peninsula Connection project, including improved road safety for motorists.

This $26million project was funded by the agency and the Dunedin City Council and took almost two years to build.

Agency regional relationships director Jim Harland said many people were keen to try cycling but were worried about safety.

Cyclists were clearly confident about using the parts of the pathway completed so far, Mr Harland said.

The work would help the peninsula community economically and improve access to "a tremendous natural landscape".

Raising the road created a more resilient route, he said.

Isn't riding an electric scooter on a cycleway against the bye-laws?

A mean spirited comment considering this is a Mum and a little kid.

"E-scooters can be ridden on the footpath, shared paths and roadways.
On the footpath users must:
be careful and considerate and ride the scooters at a speed that doesn't put other people on the footpath at risk
give way to both pedestrians and people on mobility devices."
https://www.dunedin.govt.nz/services/roads-and-footpaths/getting-around-...

It was just a question. Thanks for the answer though.

It is a wonderful asset but it is getting more and more dangerous for walkers due to thoughtless cyclists. Most are ok but some seem to think walkers shouldn't be on the path and whizz past with no warning. I have already heard of locals feeling unsafe on the path and avoiding using it, particularly on a weekend. Certainly I have had some near misses with the lycra louts. A little bit of respect and thoughtfulness goes a long way. Cyclists, use your bell or call out a warning if passing walkers and slow down if you are going fast. If you want to go fast, use the cycle lane on the road, that is what it is there for.

Yes, its easy to use a bell or call out when coming up behind someone walking. It's just a matter of thinking about other people and being considerate.