Learning to cope with a 'wonky' brain 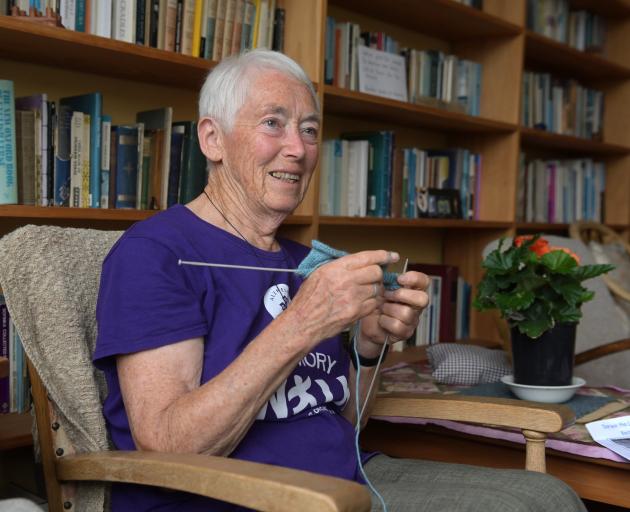 Elizabeth Duke says she is still herself, despite having a "wonky" brain. PHOTO: LINDA ROBERTSON
Dunedin woman Elizabeth Duke was recently diagnosed with mild cognitive impairment. She discusses learning to live with the illness — which can lead to dementia — and to her surprise has discovered ‘‘a plateau of happiness’’.

"My brain is going wonky."

How do I cope with odd confusions like reaching for the wrong drawer when I know perfectly well which one I need, or confusing two people whom I meet in similar contexts, or needing to check the calendar each morning to be sure what we've planned for the day?

At present where I am is described as mild cognitive impairment, but my GP has advised me that in some years it's likely to end in dementia.

This was not good news.

It's not easy to come to terms with what I had always pictured as "the worst" that could happen in later life (I'm just 79).

I have been proud of my brain, and relied on it for my livelihood and for my interests.

It has been a grief to see people I know and care about becoming apparently less themselves, ceasing to be involved with what has mattered to them, becoming more and more dependent, and gradually failing to recognise others.

I have thought I could not endure this prospect for myself, and now I am learning to live with it.

Interestingly and surprisingly, this experience of nearly two years has brought me on to a plateau of happiness.

I owe most to the love and support of my dear life partner.

She has to live with the likelihood that our plans for the rest of our life together will be overturned, that she may have to begin "thinking for two", that there are all sorts of potential decisions about care and its costs.

We find we are talking far more now about our relationship, increasing our respect for each other's individuality, and becoming more deeply aware of one another's needs.

Her great strength increases my love.

Early I made the decision to "come out" about my condition. I didn't want people to start whispering, "I think Elizabeth's losing it".

I didn't want secret measures to dislodge me from responsibilities.

The openness has been rewarded by generous support from my family and friends, and the strength I find in the Quaker community.

It feels as though people are ready to recognise that I am essentially myself, without worrying if I don't seem to remember whether they are about to move house, or which one of their children has become a parent.

Being open enabled me to let go of a number of my longer-term voluntary responsibilities.

I am still doing the Quaker work which really matters to me, and for which I feel best suited.

I've also learnt from wise people the strategy of saying "no" to ongoing jobs, and choosing carefully which one-off tasks to pick.

Being open has also been a doorway to sources of support.

I encourage everyone who is anxious about how their brain is behaving to consult their GP soon.

Quite early we made contact with Alzheimers Otago; their staff are friendly, caring and knowledgeable.

There is good information in their newsletters, books are available on loan, and each year's AGM has an interesting speaker.

Last year we took part in the street collection day, and were delighted by the warm generosity of the public.

The annual Memory Walk down George Street in purple T-shirts is quite a celebration.

Alzheimers Otago has coffee mornings in several Otago locations for those living with dementia and their companions, and groups for carers.

What I would really like is a peer support group, without the need for staff involvement, for people like me anticipating dementia, or in the early stages, to swap experiences and give mutual encouragement. Any takers?

RECOGNISING that I have cognition problems has enabled me to take advantage of public health provision, including the care of my GP.

After a lifetime without regular medication, I am now taking a daily pill to support neurotransmitter function, which is probably helping me to stay on my plateau for a time.

I have undertaken the standard cognitive tests from my GP and the Memory Clinic at Dunedin Hospital, though I'm one of the people who produce unhelpfully high results.

Apparently, if you are used to mental challenges and puzzles you can score high percentages in these tests, masking perhaps what is happening to the brain.

I am somewhere on a waiting list for more subtle neuro-psychiatric tests, though clearly not in an urgent category.

Because I've always been fascinated by science, though not trained in it, I find I want to know more about what is happening in the brain, why things go wrong with its processes, and how it copes by building new mental reserves if given the chance.

I find that my brain is observing itself, trying to work out whether the cognitive and memory slips are the sort of things which are part of the normal ageing process, or markers of connections going wrong.

Now I have an ongoing record of odd occurrences, which my GP has said is useful, though I have stopped trying to record each one, and write occasional summaries of what has been happening, and whether I notice any changes.

There are several reassuring lists of what are normal ageing slip-ups, and what are potential signs of dementia - for example on the Alzheimers New Zealand website (see the references above) - but I haven't yet found anything directly useful for someone in an intermediate state like mild cognitive impairment.

People have wondered whether my record is unhealthy concentration on what is going wrong; on the contrary, I find that once I have recorded something, I can let go of it.

The Wicking Dementia Research Centre at the University of Tasmania has two excellent free online courses, "Understanding Dementia" and "Preventing Dementia", which are repeated annually.

Several have a nursing background, others medicine or science research. I benefited greatly from following the courses.

A number of those studying are employed in dementia care or related professions.

Many others are family members or friends of people living with dementia; they are seeking to understand what is happening, and how they can best respond.

Brain troubles, I have learnt, can affect different parts of the brain, and so different brain functions, gradually.

AT present my problems are with memory, confusion between similar people, finding when speaking that the word I want might have slipped away (it usually returns), and a few spatial functions, such as going to the wrong drawer when not concentrating; when typing my fingers have become more inclined to hit keys out of sequence, though the spelling is very clear in my head.

To my great relief, the more directive and reflective parts of the brain appear to be unchanged.

I can think about things in detail, can understand languages I learnt at the same level as in the past, and can follow the arguments I used in my 50-year-old thesis, which I am revising for publication as fast as I can.

If it weren't that all this process is happening to me, it would be fascinating to watch.

But it is happening to me.

The inner heart-grief is usually quiet. I don't live in horrified anticipation of when I may no longer be able to think as I do now, but occasionally the prospect of the "valley of the shadow" is a clear reality.

However, I am finding my present time an opportunity for religious and personal growth.

I have a sense of peace and guidance, and gratitude for the opportunity to live life more fully.

Mild cognitive impairment has made me more aware of how I have failed to recognise the personal wholeness which remains in people who need help to function effectively, how I have found it difficult to listen and to speak to them as themselves, rather than making conversation by telling them things I guess might divert them.

Late in life I am learning to see others carrying all sorts of inner burdens, and to value their strengths, instead of evaluating what they can no longer do.

I am also becoming aware of how we as a society may be trying, often unsuccessfully, to manage provision for people with all sorts of disadvantages, rather than being open to their preferences and decisions.

There are splendid campaigners for inclusiveness, for full participation in our collective life, but we have a long way to go.

www.alzheimers.org.nz - for guidance and information

- Elizabeth Duke settled in Dunedin in 1976. She lectured in classics at the University of Otago, then worked for 7½ years for the Quaker worldwide body Friends World Committee for Consultation; based in London, she visited and supported Quakers in many countries. In retirement Elizabeth is an active Quaker, a Green Party member, and on the Council of Araiteuru Marae.