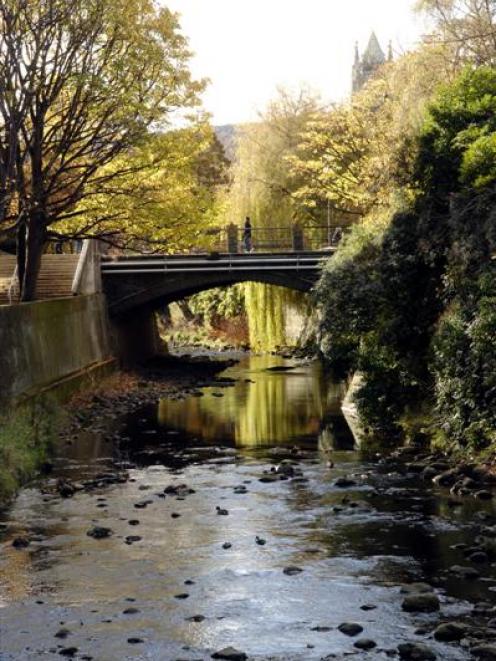 At present, the stream - the only major waterway in the metropolitan city -was "generally visually and physically inaccessible", the report said.

East of the campus, its visually-dominant split concrete channels had "the character of an industrial drain".

But the vision was for the Leith corridor to become an important city amenity by widening the river with terraces, installing new bridges at Leith Walk and Riego St, upgrading riverside plantings and creating an integrated riverside walk.

There was also potential for a half-tide barrier to be built near the mouth to increase the volume of water retained in the river during normal flows, and to allow the removal of the mid-channel concrete barrier.

With the assistance of the city council and private landowners, it might be possible to create a riverside walk from the Dunedin Botanic Garden to the sea, the report said.

While the Leith is a small body of water for most of the year, it does flood. The most significant flood was in March, 1929, when the Leith, Clyde and Harbour Tce bridges were swept away.

About a dozen floods have occurred since.

The Otago Regional Council has been planning an upgrade of flood protection works along the Water of Leith and Lindsay Creek for about 10 years.

Work was delayed by an Environment Court challenge, and a delay in the regional council's receiving detailed designs and costings from its consultants.

The university's master plan suggests an alternative to the regional council flood mitigation proposal for the Leith as it passes through the campus.

Instead of increasing the height of the existing concrete retaining wall to contain the flow, the plan suggests creating a natural flood area at the Leith Bend.

The information technology services building spans the river at the bend, but the plan proposes demolishing it and two other buildings nearby and creating a series of landscaped terraces, on to which the water could flow naturally during flood periods.

Further discussions with the regional council were recommended.

The regional council may be happy about the proposal, as it has already said trying to widen the stream channel without undermining the foundations of the ITS building was going to be a major challengeOutside the university clocktower building, both the regional council and the university are suggesting a gently-sloping, landscaped bank be constructed to replace the existing retaining wall.