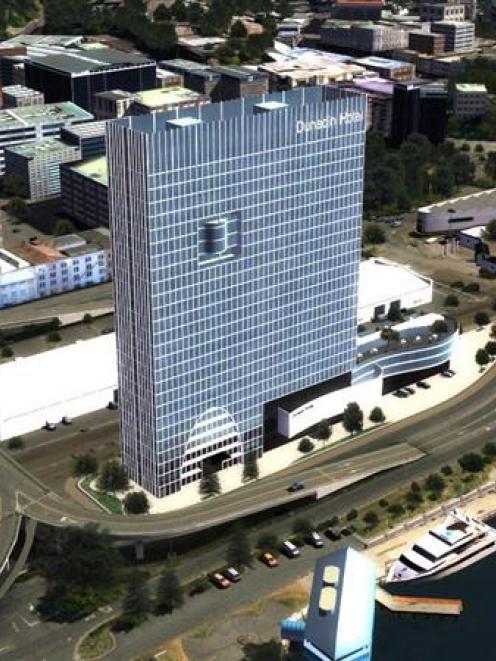 A computer-generated image of the proposed hotel overlooking the Steamer Basin. Image by Animation Research LTD/Virtual Eye.
Strong links to Dunedin and the University of Otago appear to have sealed the deal for Chinese developers to decide to invest $100 million into a new 28-storey hotel on the city's waterfront.

Last week, Dunedin lawyer Steve Rodgers, of Rodgers Law, announced plans for the five-star luxury hotel on the waterfront but declined to name the developers.

He confirmed the developers were putting up the full cost of the project. Their names would be made available when construction started - expected to be early next year.

It is understood the wife of the developer is a University of Otago graduate who went on to work at Dunedin accountancy firm WHK, where she worked with present managing principal Otago, Matt Taylor.

Mr Taylor is believed to be close to those brokering the deal between the developers and the property owner Arthur Barnett Properties Ltd, a company controlled by Dunedin man Tim Barnett.

The ODT was told the woman recently married and her "relationship" with Dunedin meant she wanted to give something back to the city.

The Dunedin relationship was a large factor in deciding to build in Dunedin, as too were the earthquake risks in Wellington and Christchurch.

Mr Taylor was out of Dunedin yesterday and could not be reached for comment.

A planning application lodged with the Dunedin City Council is on behalf of Betterways Advisory Ltd to erect and operate a licensed hotel with 215 bedrooms, restaurants and bars and 164 self-contained apartments, together with parking for buses and cars.

Mr Rodgers, who is the director of Betterways, declined to comment on the speculation as to the identity of the owners. When pressed, Mr Rodgers said he did not know if the newspaper's information was correct.

However, he had been concerned by comments this week that Dunedin ratepayers would be contributing to the hotel development.

"The Dunedin City Council is not providing any assistance, nor has it been asked to.

"What's more, if anything, given the latest developments with the Forsyth Barr Stadium, having 160 extra ratepayers in the city has to be good news."

The 160 extra ratepayers would come from people who bought the apartments within the hotel development, he said.

Representing Betterways, Don Anderson, of Anderson and Co, said the need for the resource consent application arose because of the district plan provisions, not adverse environmental effects.

Some adjustments to the adjoining carriageway were desirable, but were not essential to the project.

Mr Barnett said he had been planning a development for the site through a syndication deal or with a government department when he had been approached by agents for the developer wanting to buy the site for a hotel. He had owned the property since 2002 and had reached a time in his life when selling the property outright made sense.

Mr Barnett had also been disturbed by some of the criticisms that had arisen after news had been released about the hotel, particularly why Dunedin should have a five-star hotel when other main centres were still waiting.

"But just like the Docklands, in Melbourne, South Bank and Adelaide, they all started with the first big building."