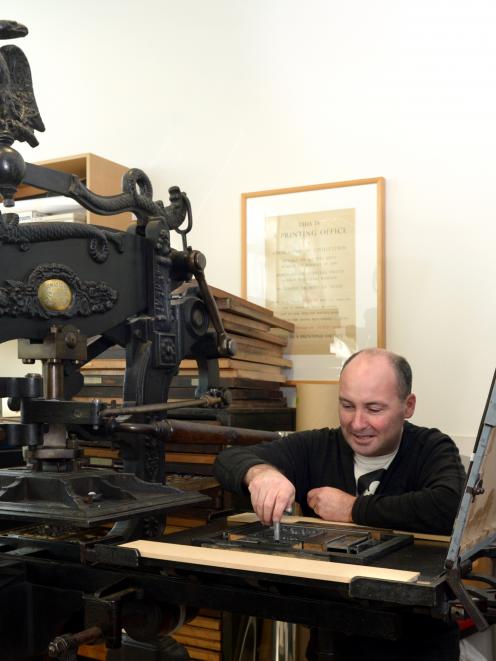 Otakou Press printer in residence Peter Vangioni works on the Columbian Eagle press in the University of Otago library yesterday. Photo by Gerard O'Brien
A visiting artisan has been making a good impression in Dunedin.

Kowhai Press owner Peter Vangioni, of Christchurch, has had some pressing business over the past week, with a 150-year-old Columbian Eagle press.

''Having the opportunity to print something on this is the bee's knees. It's pretty special,'' the Otakou Press printer in residence said yesterday.

''It's quite rare. There are only seven in New Zealand and this is the only one operating.''

The Columbian press was invented about 1813 by George E. Clymer and was designed to allow a whole newspaper page to be printed in a single action.

It was often referred to as the ''Eagle Press'', due to the characteristic bald eagle counterweight on the top lever.

''It's pretty much the same as the press Gutenburg invented in the 1450s,'' Mr Vangioni said.

''This one would probably have been used for printing local rags in Dunedin.

''It's amazing that it's still functioning. A lot of this stuff ends up in museums and on display.''

Mr Vangioni said the old press was a challenge to use.

''It's very time-consuming, but I wouldn't have it any other way. It's a nice change from computers. You get lost in it.''

The Otakou Press printing residency was a unique opportunity for printers.

''For Otago to have this space is incredible,'' he said.

''It's the only residency like this in Australasia. It's a chance for New Zealand letterpress operators to come down and collaborate with Dunedin writers and artists.''

Mr Vangioni has been working with Otago Polytechnic School of Art drawing and painting lecturer and experimental musician Michael Morley on a book of poetry, XXXXXwords. Morley is known for his association with groups the Dead C and Wreck Small Speakers on Expensive Stereos.

XXXXXwords will be published in a limited edition of 100.