'Lord of the Rings' paintings unearthed 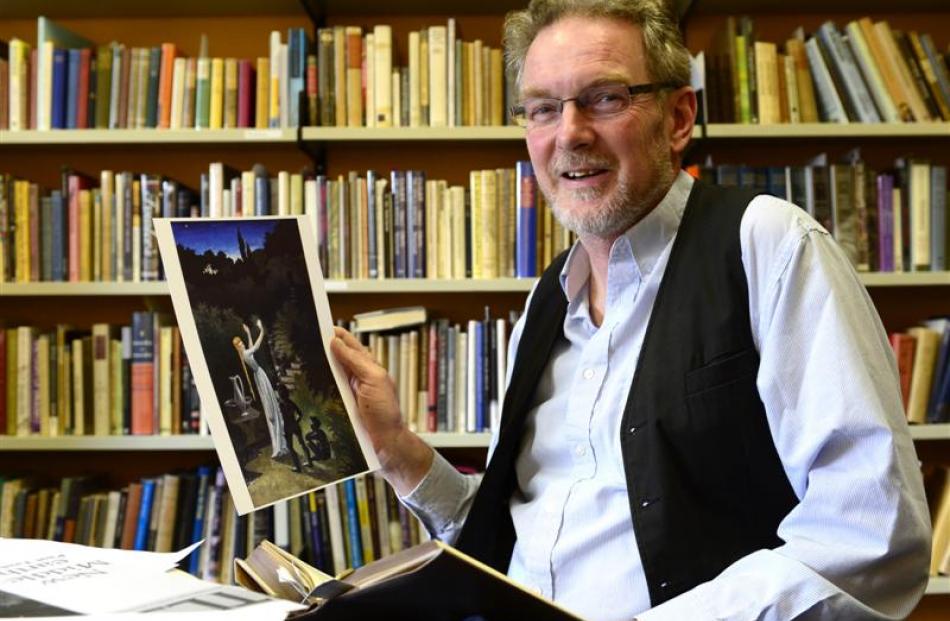 University of Otago researcher Dr Paul Tankard reflects on a photograph of a painting, depicting Galadriel at the well in Lothlorien with Frodo and Sam, which artist Mary Fairburn created to illustrate a scene from The Lord of the Rings. Below: Miss...

University of Otago researcher Dr Paul Tankard has sparked international media attention after tracking down a series of lost illustrations for The Lord of the Rings, which were highly praised by author J.R.R. Tolkien but never published.

The illustrations, by a previously little-known English artist, Mary Fairburn, now aged 78, widowed and living in Victoria, Australia, and Dr Tankard's research have just been highlighted by a front-page story in The Times Literary Supplement.

Dr Tankard, an Australian-born senior lecturer in the Otago English department, is making something of a habit of literary detective work.

Early last year he hit the headlines in Britain by tracking down a lost transcript of a television interview with celebrated British writer C.S. Lewis, an Oxford University don, novelist and literary critic.

Oxford University researcher and author J.R.R. Tolkien thought illustrations did "little good" to stories of the fantasy or fairy-tale kind - but when it came to The Lord of the Rings, the "ill-fated work of Mary Fairburn made him reconsider", Dr Tankard wrote in the supplement.

In May 1968, Tolkien was sent some samples of illustrations for The Lord of the Rings by Miss Fairburn, a London-born artist and art teacher, writing from Winchester.

At that stage, Tolkien, a former Oxford University professor, was aged 76 and living in retirement in Oxford. He initially wrote back to her saying her works were "splendid" and better than any other illustrations previously sent to him.

She had sent at least three pictures, including a pen-and-ink illustration of Gandalf on the tower of Orthanc, and "a little sketch of Gollum".

After seeing her "specimens" he was beginning to "think that an illustrated edition might be a good thing" and would be "very pleased indeed" to see her other pictures when they were finished.

But a few weeks later, Tolkien's "life and affairs were thrown into chaos", Dr Tankard said.

On June 17, he badly injured his leg at home and was hospitalised. There was further disruption when he and his wife shifted to a house near Bournemouth.

Miss Fairburn later explained to Tolkien she had been "sleeping on the floor of a condemned basement", and faced significant hardship and debts.

But her hopes of being able to illustrate The Lord of the Rings were to be dashed.

Tolkien was sympathetic and sent her 50 as a gift.

She later emigrated to Australia, where she has lived for more than 40 years, and the academic world knew nothing about Tolkien's praise for her or about the pictures she had produced.

All that changed after Dr Tankard travelled to Castlemaine, about 120km northwest of Melbourne, in late 2010 to visit family members.

Told an artist living there had apparently had links with Tolkien, Dr Tankard went to see her, and was shown letters from Tolkien. He knew he was "on to something".

The Tolkien Estate, which holds the copyright for all Tolkien's letters, allowed him to use the letters, and also gave him access to letters Miss Fairburn had sent Tolkien.

Despite receiving high praise from Tolkien, she had had difficulties having her work published or displayed in galleries.

"She's never had any fellowships or arts council grants or anything like that.

"I'm sure it's rankled with her over the years.

"In many ways I'm excited for Miss Fairburn.

"She's had a life of not much recognition for an awful lot of hard work."