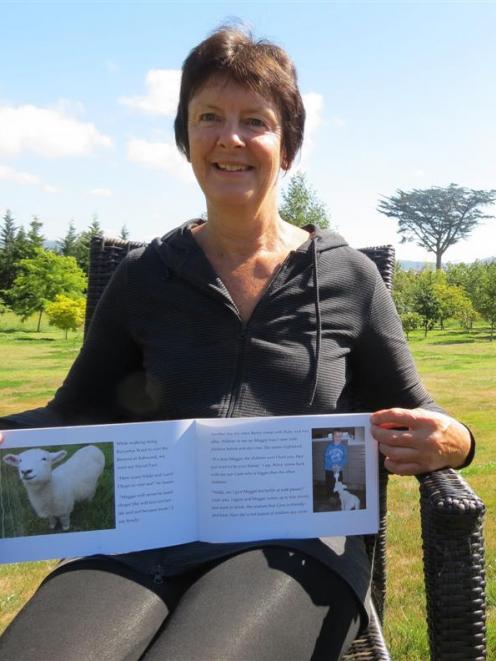 East Taieri resident Nikki Miller is launching a fundraising book about a lost lamb, Meggie, she rescued. Photo by Jonathan Chilton-Towle.
The tale of Meggie the lost lamb is set to raise money to benefit children living in an orphanage in India.

East Taieri resident Nikki Miller discovered a lamb that would come to be known as Meggie while she was walking on Saddle Hill in 2011.

She heard bleating and while walking back down the hill she could still hear it, so she went to investigate and discovered two lambs in a bog with no mother in sight.

She located the farmer and asked him if she could take the lambs home and look after them.

Unfortunately, Alpha was ill and died soon after being found.

Omega - the name was later shortened to Meggie - was healthier and soon became a household pet.

She was loved by Mrs Miller's grandchildren and would often follow the family on walks, just like a dog.

After initally being standoffish, Meggie became friends with Mrs Miller's two cats, Cozzie and Bella, and the trio could often be seen snuggling together.

Tragically, Meggie's life was cut short when she died while giving birth.

Mrs Miller decided to write a book about Meggie.

''I thought things happen for a reason,'' she said.

''I've got to do something positive with this.''

She finished writing the book, which tells Meggie's story and includes pictures taken during her life, late last year.

The book is called Raising Meggie.

It was printed in December by South City Print, which agreed to make some free copies.

She would uses profits raised from sales of the book to benefit the Rehoboth orphanage in Kerala, India, which is run by her daughter-in-law's great-aunt.

Mrs Miller will launch the book at 5pm on March 4 at Mosgiel Paper Plus.