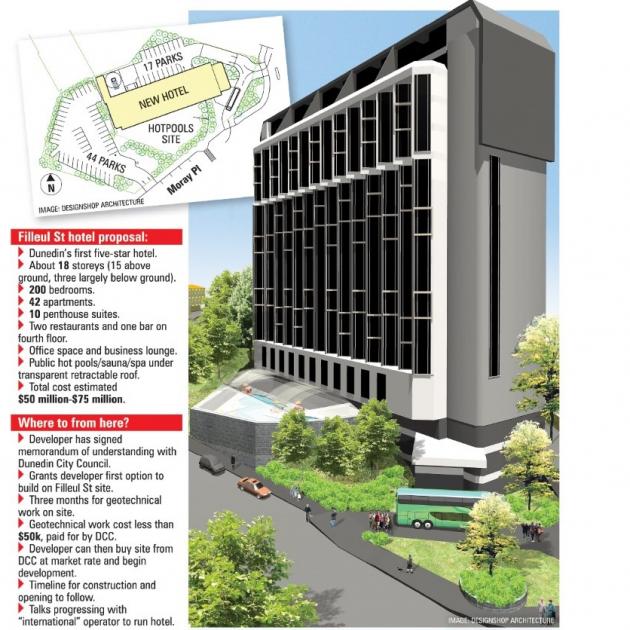 An  18-storey five-star hotel in the heart of Dunedin is a step closer to reality following the signing of an exclusive deal.

It was confirmed yesterday the Dunedin City Council has signed a memorandum of understanding with the hotel's developer, NZ Horizon Hospitality Group Proprietary Ltd, to progress the project. 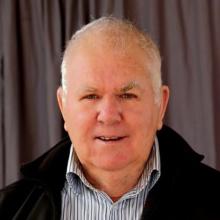 The deal gives the company exclusive rights to the council's Filleul St car park site, opposite the town hall, where the company hopes to build a $50 million-$75 million hotel complex.

A final decision on whether to build is expected before the end of the year, once a geotechnical site investigation and other due diligence is completed.

However, the site's zoning and 10m height limit mean a resource consent will be required, potentially opening the door to another protracted public debate over a high-rise hotel in the city.

Despite that, Dunedin Mayor Dave Cull welcomed the deal, saying a five-star hotel would be a ``significant'' coup for the city.

Project spokesman and architectural designer Ken Taylor, of Dunedin, said the hotel would provide a boost for the city's conference venues, including the Dunedin Centre and Forsyth Barr Stadium.

It would also bring new jobs to the city, improve its accommodation capacity for big events and help attract more wealthy, high-spending guests, he believed.

``It's a five-star hotel. It's not in competition with anything else around the city. It's in a class of its own,'' he said.

Also included was a hot-pool complex, which would be open to the public, to be built beside the main building and covered by a transparent, retractable roof.

The hotel would be run by an international hotel chain, the name of which remained under wraps for now.

Mr Taylor also declined to name the hotel's principal developer yesterday, saying the man wished to remain anonymous, but the ODT understands he is Anthony Tosswill, of Tekapo.

Mr Tosswill's other property interests were understood to include ownership of a Malaysian resort, while his Linkedin profile mentioned plans for 12 hotel projects, worth $500 million, across the South Island.

He also had links to a Chinese company, Xiangbo Trustee Ltd, which was also involved in his Tekapo developments, Companies Office records showed.

Progress on his Dunedin hotel came more than a year after talks between the parties began, and nine months after the Otago Daily Times first reported an anonymous developer was interested in the site.

It also came two years after a bid by Betterways Advisory Ltd to build a 27-storey hotel on Dunedin's waterfront was scrapped after the relationship with the council became acrimonious.

Mr Taylor accepted the proposed Filleul St hotel's height could be a concern for some people, but hoped most would be ``excited'' by the project.

The developers had been in ongoing discussions with council staff over aspects of the project, including its design, which it was hoped would be sympathetic to the city's heritage, Mr Taylor said.

The design's ``verticality'' aimed to reflect the city's gothic architectural heritage and the hotel's surroundings, including the nearby town hall, he said.

``We're doing out best to address the issues first,'' he said.

However, the hotel's height would still rival Dunedin's tallest building, the 56.3m-high First Church, with its top floor sitting about 10m below the top of the church's spire.

Mr Cull said the council also wanted a ``sympathetic'' design, which could be an issue for the resource consent process.

``It's too early for it to be an absolute requirement, but it certainly would be an expectation,'' he said.

He was impressed by the developer's approach to date.

The council had rolled out the red carpet by agreeing to pay for geotechnical work on site, costing between $30,000 and $50,000, the ODT understands.

The company would have to buy the site at market value, but would also receive relief from development contributions, worth $1 million, if the project proceeded.

Mr Cull said such incentives were designed to encourage the project and would pay for themselves in time.

``In the long run, if the hotel gets built and it's of substantial size, you get maybe $1 million a year in rates. You wouldn't have got that if the hotel didn't go up.''

While it's probably good for Dunedin job and money wise, The design honestly looks like a large bar heater lol

Considering current construction costs and hotel rates in Dunedin I fail to see how this could stack up financially. There would be no change from $120 Million for the proposal mentioned. Mr Cull as always is looking through rose tinted glasses and should think twice before he commits $50K of rate payers money. Time for some fresh eyes in that office I think.

Design can be a loose term, but go ahead and build it. Dunedin needs the jobs and 15 floors above ground is really not high.

Only problem I have is how you can reasonably determine market price with only one bidder. DCC shouldn't be picking winners. They could have sold the land at auction with clear stipulation a hotel be built within x years. This one becomes a gift to the Chinese investors.

Great deal if you can get it. Get the council to pay all upfront costs. Secure the right to buy. Get consent to build (adding huge value to the site). Then sell the site for a huge profit with no money down and not lifting a finger. Very smart plan for the "developer", not so smart from the council.