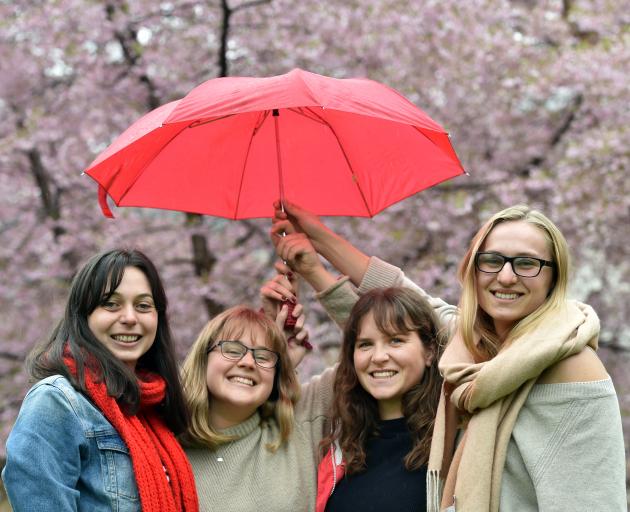 Stepping down after overseeing a four-year University of Otago student fundraising involvement with the Te Whare Pounamu Dunedin Women's Refuge is Maddi Ingham (22, left), pictured with her successors Annie Grimes (20) and Lucy Aitken (20) and Women's Refuge Appeals Committee member Emma Loveard (21). PHOTO: PETER MCINTOSH
A University of Otago student is preparing to hand over leadership of a group which has raised more than $100,000 for the city's women's refuge over the past four years.

The group of 100 predominantly law students have held charity auctions, bake sales and other fundraisers to contribute towards the running costs of Te Whare Pounamu Dunedin's Women's Refuge.

Ms Ingham said this year alone nine different events were held, including a quiz, a sold-out charity gig at 50 Gorillas, a charity auction, cheese roll sales, and other fundraisers.

``We always get a really good response,'' she said.

This year had been the best yet.

Refuge manager Wenda Parata-Muir said a special afternoon tea would be held on Friday at the refuge's main offices to recognise Ms Ingham's contribution and to welcome her successors, Annie Grimes and Lucy Aitken.

For about seven years, the refuge had been receiving help from the group of students.

The money enabled the refuge to offer better services to its clients, and freed up refuge workers to focus on their work, rather than fundraising.

``We don't have the people power on the ground,'' Ms Parata-Muir said.

Examples of services the refuge was able to provide due to the committee's work were stationery for the children's art programme, Ms Parata-Muir said.

The refuge wanted the best for its clients, and wanted not only to provide a place for them to stay but to give them respect and dignity.

Currently, caseworkers at the refuge had a total of about 145 clients on their books.

In August, she said demand for refuge services in Dunedin was at its highest level since she started working with the organisation in 1991.