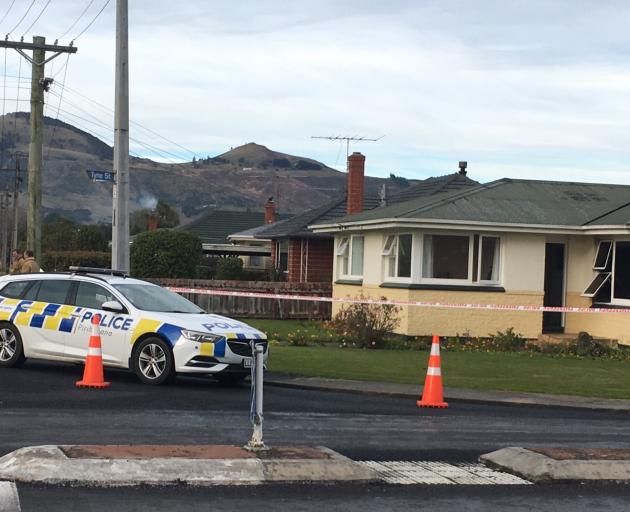 The fire happened on the corner of Braemar and Tyne Sts. Photo: Gerard O'Brien
Police have released the name of an elderly Mosgiel man whose body was discovered by firefighters on Sunday morning.

"Our thoughts are with My Pennington's friends and family at this difficult time," police said in a statement.

Fire crews converged on the man's property at the corner of Braemar and Tyne Sts shortly after 8.30am, following reports of smoke coming from the roof of the house.

Upon entry they found a man unconscious. He could not be revived and St John said he died at the scene.

Senior Sergeant Craig Dinnissen, of Dunedin, said earlier this week the cause of death remained unexplained.

Forensic specialists from Environmental Science and Research had been sent to help detectives and fire investigators.

It is unclear whether the man died before or after the fire started.

It is understood while the death of the retired man is unexplained, it is not thought to be suspicious.

His grandson Steven Cooper told the Otago Daily Times  Mr Pennington was a keen golfer who loved his family.

"All of us kids have been through here.

"My mother, all her sisters, her brothers, all raised in this house.

"He always had time for his family.

A woman who lives next door, and who asked not to be named, fought back tears as she described a man who was a friendly face over her fence for more than half a century.

"He was a neighbour of about 54 years ... and he was a lovely neighbour and friend.

"I'm still quite emotional about it.

"It's just sad to think that you get to our age and it ends like that.''