A Dunedin musician has been cleared of criminal offending after a note he posted on a disused building was seen as a bomb threat and caused the CBD to be shut down.

Dene Barnes (44) appeared for a judge-alone trial before Judge John Macdonald today and claimed the poem he put up with a cassette of his latest release was simply artistic expression.

He pleaded not guilty to the allegation that: "Without lawful excuse and without claim of right, knowing a letter to contain a threat to damage property, namely a building, office and house, secured the said letter to 318 Moray Pl and caused the said letter to be received by members of the public."

Judge Macdonald this afternoon dismissed the charge, saying that in context, the words on the note did not constitute a threat.

He had an idea to give away his new release by sticking cassettes to derelict buildings around town attached to poetry which reflected the music:

A Dunedin police officer asking people that get back from the cordon at Moray Pl. Photo: ODT

"When there’s nothing left to lose.

"i will firebomb your car.

"i will hack into your computer. "i will leak trade & state

"i will hammer holes in your office windows.

"i will raise [sic] your buildings to 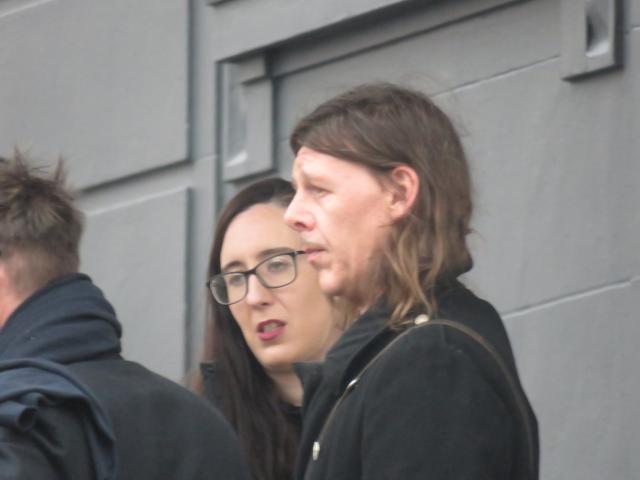 "i will bring you down," the Moray Place note said.

The defendant explained the inspiration behind the verse: "I just wanted something that went with the music which was despairing and dark, and I adopted the persona of someone who was homeless and mentally ill.".

When police interviewed him following the June 16 fiasco, the defendant said the promo was never supposed to look like a bomb.

"It wasn't a prank or a practical joke," he said. "I didn't think it would be perceived as sinister."

Ms Stevens said on June 8, police were called about a similar posting Barnes had fixed to a building on Rattray St following a call from the public.

An officer went to the scene, photographed it and took the items back to the station.

The director of Audio Foundation Jeff Henderson said the defendant had been a "revered and renowned" musician and artist for 20 years who was better known overseas than in New Zealand.

"Dene's performances are enthralling and always serve to inspire and challenge audiences and musicians alike," he said.

Unitec academic leader and senior lecturer Dr Scott Wilson said Barnes had been the subject of international discussion in the genre of "noise music".

He compared the defendant's work to Andy Warhol and said: "I firmly believe that the work of Mr Barnes and his project L$D Fundraiser is a public work of art and should be treated as such."

Much of the central city was evacuated and cordoned off for hours on June 16 as police assessed the threat.

The New Zealand Defence Force’s explosive ordnance disposal squad was flown by helicopter to the city and destroyed the package in a controlled explosion carried out by a remote-controlled robot.

Police prosecutor Adrian Cheyne accepted Barnes did not intend his art to be construed as anything menacing but he said if read literally the words could been taken that way.

Judge Macdonald disagreed and will release his written judgement next week.

Outside court, Barnes said he felt vindicated by the ruling and believed the police had "overreacted and misinterpreted".

Police raided his home before charges were laid, he said, and he was "gobsmacked" to be charged.