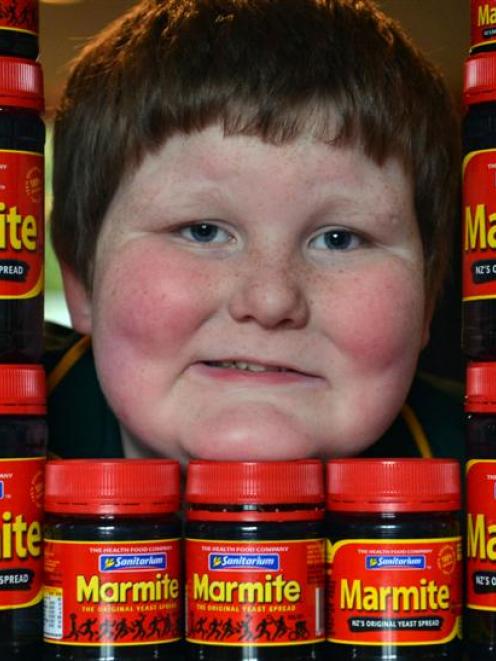 Luke Bain, of Dunedin, has no need to worry about his Marmite supply after many people came to his rescue by offering their own jars. Photo by Peter McIntosh.
Marmite may be in short supply but several Otago people are more than happy to go without theirs, to aid 12-year-old Dunedin lad Luke Bain, who has autism.

Using the spread is the only way Luke's family can disguise medication to control his violent impulses and severe anxiety, but their stocks were running low.

After his plight was featured in Saturday's Otago Daily Times, several people offered their help.

Among them was Otago Boys' High School camp co-ordinator Bill Trewern, whosaid about eight jars, including three 500g ones, could go to Luke.

Ngaio Brown offered an unopened jar, which she had spare.

"If it's essential for him to have his medication, I don't need the jar. I can go without Marmite for a while," she said.

Julienne James felt the same, saying her offer of a 175g jar, "only used once", was "not much" but she could "do without my Marmite and Luke can't".

Tracy Herbert, of Heriot, knew how important it was for Luke to have his medication as she also had a son with autism.

She was given two jars of Marmite by a friend who thought it was all her son would eat.

However, he happily ate other spreads and she thought it was better for Luke to have the Marmite.

Three jars donated to the foundation were up for auction on Trade Me and Mr O'Brien thought if someone bought the Marmite to give to Luke, it would be a "win-win" for people in need.

Luke's mother, Sharon, Autism New Zealand service support co-ordinator, said she had received great feedback on the ODT story. People had contacted her offering Marmite and also left some in her letterbox.

She believed she would have sufficient Marmite to last until stocks were back to normal and enough to help other people in similar situations.

Through her work at Autism New Zealand, she knew of other children who used Marmite to administer medication and she would send a supply to the organisation to distribute.