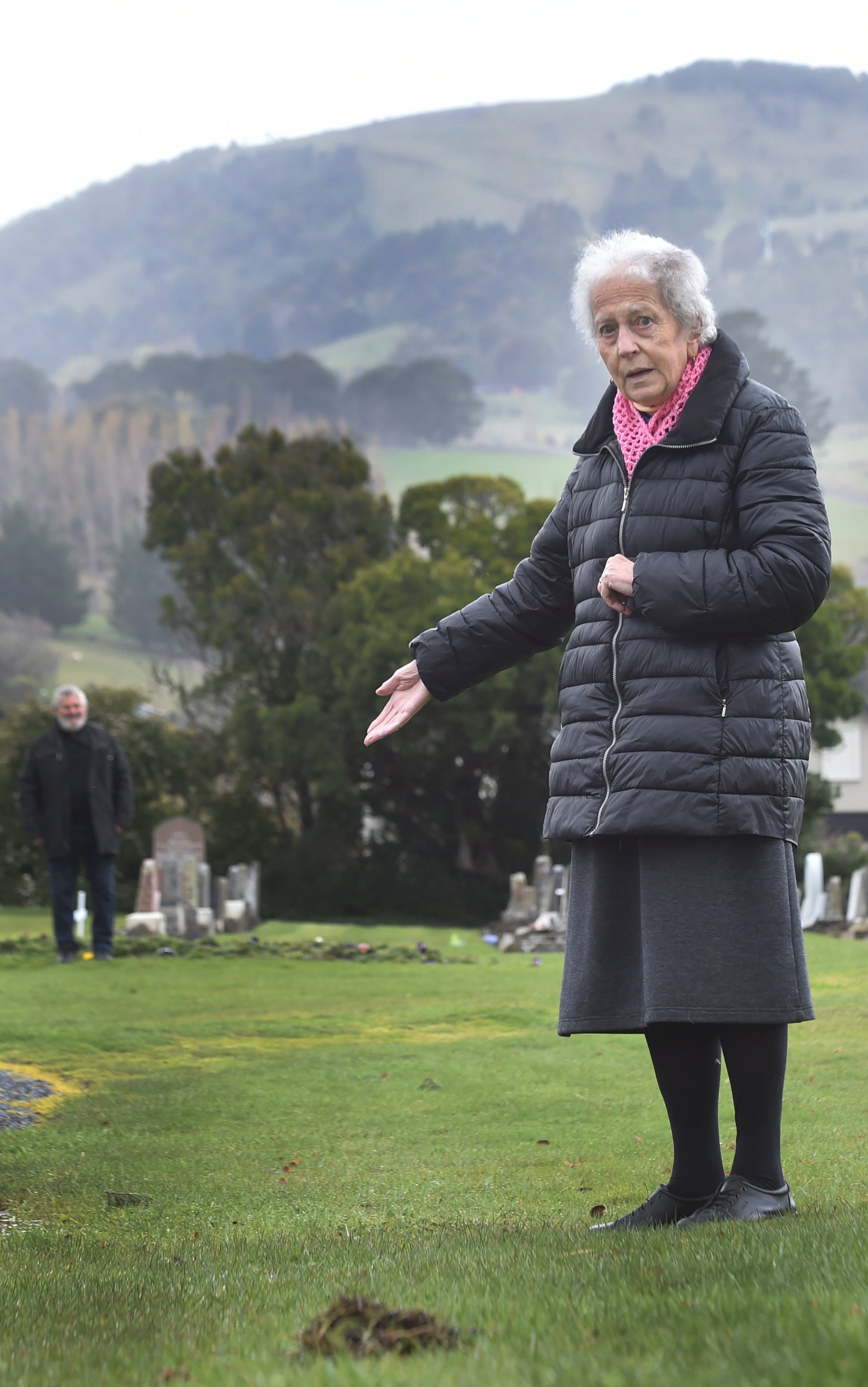 Mosgiel resident Margaret van Zyl (right) stands at the proposed location for a memorial wall at the East Taieri cemetery, while Mosgiel Taieri community board member Brian Miller stands at her preferred location. PHOTO: PETER MCINTOSH
It was supposed to be a place of peace, but disagreements over a proposed memorial wall at the East Taieri Cemetery kicked off skirmishes at a contentious meeting of the Mosgiel Taieri community board on Wednesday evening.

Dunedin City Council group manager parks and recreation Scott MacLean presented a report on the wall and said it had been proposed by Mosgiel resident Margaret van Zyl during the 2020-21 Annual Plan process.

Staff had worked with Mrs van Zyl to select a suitable site for the wall.

However, investigation of the site with ground penetrating radar revealed subsurface anomalies in the originally selected sites, which indicated there may have been unmarked graves on the site.

The report speculated the graves may have been those of stillborn babies, which historically were often buried in unmarked graves in cemeteries of a similar age to the Mosgiel site.

A new site had been selected within 10 to 15m of the original site, which did not have the same issues.

Community board member Brian Miller had earlier unsuccessfully attempted to have the report postponed until the community board’s November meeting during the confirmation of the agenda.

Board member Brian Peat said he had received an email from Mrs van Zyl, who had received angry emails from other Mosgiel residents about the proposed design and location of the wall.

The board voted to note the report. Mr Peat voted against the motion and Mr Miller abstained.

Mr Miller then gave an update to the board on the activities of the Friends of the Mosgiel Memorial Gardens group.

He took issue with the selection of a site for a plaque in the gardens, and put a motion that said "in matters relating to the memorial gardens the friends of the gardens group are consulted".

Mr MacLean said that such a motion would not be workable and "wouldn’t be supportive of having to consult every time we did anything in the gardens, for obvious reasons".

Board chairwoman Joy Davis attempted to let the motion lapse, but Mr Miller insisted on a vote being taken.

With this vote, procedural chaos descended on the meeting.

In the initial vote, board member Dean McAlwee was not asked for his vote.

Once that error was corrected, the vote was 4-3 in favour of the motion, with board members Phillipa Bain, Martin Dillon, Mr Miller and Mr Peat all voting yes.

This kicked off a sequence of points of order and adjournments, with the result that the passed motion was instead declared invalid, on the grounds that the board could not give instructions to council staff.

A amended motion was put by Dunedin City Council board representative Carmen Houlahan, asking that staff consider informing the friends of the garden group on matters relating to the garden passed instead.

As a final farcical denouement to proceedings, the sound cut out from the public Youtube stream of the meeting as it approached the two and a-half hour mark.

The meeting continued for 20 minutes with board members oblivious to their muted microphones, before the video feed was replaced with a title card that said "we are currently experiencing technical difficulties" which remained until the meeting went off the air.

Speaking after the meeting, Mrs van Zyl said she was was not impressed by some of the behaviour during the meeting.

"That poor man Brian Peat kept getting blocked ... I thought that was disgusting."