Messenger kept home, but message gets to New York

A Dunedin woman was given about $44,000 worth of space on a New York billboard to mark World Ovarian Cancer Day.

Jane Ludemann was diagnosed with a rare form of ovarian cancer in 2017, at the age of 32, and was told she would likely live another five to 15 years.

Low-grade serious carcinoma was only recognised as its own cancer in 2004 and, with current treatments, less than 15% of women survive.

The 35-year-old had been advocating for more research and awareness since her diagnosis, and was inspired by another woman who had the same ovarian cancer. 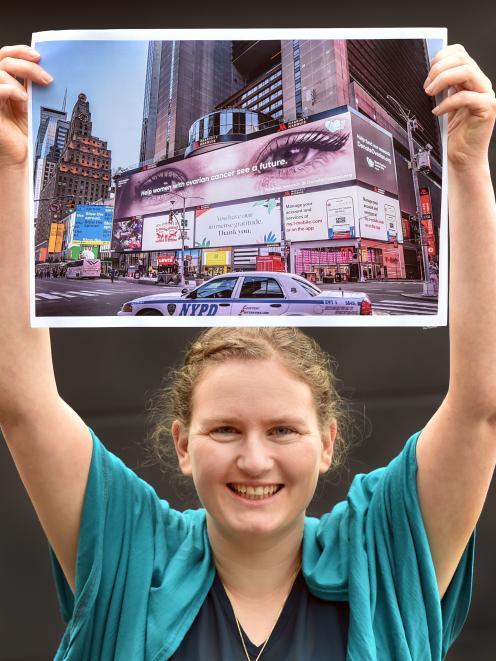 Unable to travel to New York to mark World Ovarian Cancer Day on Friday, Dunedin woman Jane Ludemann instead found an agency willing to advertise her cause on a billboard. PHOTO: PETER MCINTOSH

Two years ago, Canadian model Elly Mayday went to Times Square to campaign for awareness of the cancer.

She died in 2019, and Ms Ludemann said this year she would continue the model’s legacy and travel to campaign in Times Square for World Ovarian Cancer Day on Friday, alongside 60 other women.

Covid-19 stopped the trip, but did not stop Ms Ludemann from continuing her efforts for something to be in Times Square.

"It was a bit disappointing to not be able to go, but I wanted to make sure there was still some way of marking it."

She emailed advertising agencies in New York and one answered the call, offering her free billboard space on Friday estimated to be worth $44,000.

Ms Ludemann said it was "amazing" to see the billboard and bring awareness to ovarian cancer.

"It was so surreal seeing the photos."

Ms Ludemann hoped to travel to New York next year if she was healthy enough, but in the meantime was devoting herself to Cure Our Ovarian Cancer, a charity she founded that facilitates donations for research on low-grade serious ovarian cancer.

"There needs to be more; there just isn’t a lot of information out there."

To give to Cure Our Ovarian Cancer, visit cureourovariancancer.org/nz