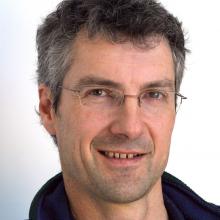 Gerry Closs
A zoologist has joined the chorus of voices opposing the proposal to mine Foulden Maar, near Middlemarch, describing it as "obscene".

University of Otago zoology department head Prof Gerry Closs said the site was a "treasure trove" of material and scientists had only just scratched the surface when it came to uncovering the fossils that lay inside the 1km by 800m area.

"A lot of the animal fauna has never been studied. We know it's there, but we don't know the detail," Prof Closs said.

"We've only taken a couple of teaspoons out."

Foulden Maar held some of the oldest fish fossil records in the country, and the information the 23 million-year-old site had yielded so far to University of Otago geologists was "just fantastic".

He said he was appalled when he heard about the proposal to mine part of New Zealand's ancient history for diatomite.

"It's quite likely deposits in Foulden Maar could turn up all sorts of things," he said.

"We haven't got that many fossil deposits around."

Scientists were still piecing together the "jigsaw" of how animal fauna had evolved in the country in the past 40 million years.

For instance, researchers knew almost nothing about how insect fauna had evolved, and there were few places where it was possible to study that.

At Foulden Maar, 200 different types of insect had been discovered.

He thought other botanists and geologists at the university shared his views, and said he had not met anyone who supported the proposal in any way.

"We're just universally horrified. It's obscene, I couldn't put it more strongly than that."

Prof Closs was also co-director of Catchments Otago, which was involved in improving management of land and waterways on a large scale.

"For plans such as this it's hard to say what impact it would have on land management or water management in the area."

He was disappointed to hear of mining company Plaman Resources' plan to take large trucks along the Middlemarch Rd - but said compared with the loss of the "treasure trove" of fossils, other issues were trivial.