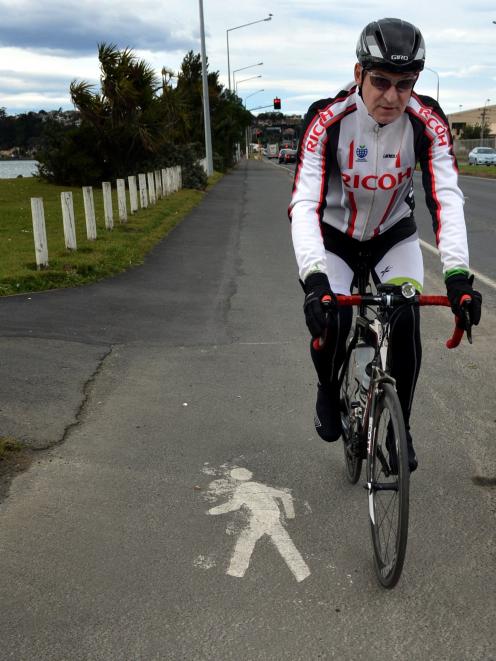 Dunedin cyclist Russell McGarry had the Portsmouth Dr shared path more or less to himself at lunchtime yesterday, but says that is increasingly unusual. Photo by Peter McIntosh
Cyclist numbers are on the rise on Portsmouth Dr since new cycleways have been made in the area, in apparent opposition to claims nobody in Dunedin cycles.

As part of the South Dunedin Cycle Network project, permanent counters were installed in February to monitor cycle numbers.

Senior transportation planner Lisa Clifford said North Rd was installed as a control site because the council has not been making any improvements to the cycle network in that area.

Over winter, when staff would expect to see a drop in cycle numbers, as occurred on North Rd, Portsmouth Dr had had a significant increase in the number of people cycling, she said.

Some commentators have recently been critical of the city council's investment in cycling, including businessman Russell Fewtrell, who this week said the council was too focused on cyclists ''but there are no cyclists''.

The council's finding was backed by cyclist Russell McGarry yesterday, who said he cycled the Portsmouth Dr route most days at present while in training for an event.

There had been a noticeable increase in the number of people using the route this year, he said, particularly since the path along that part of the road was widened.

While not a commuter through that area himself, he said he sometimes returned from a ride around the peninsula later in the day and the route became ''exceptionally'' busy with commuters from about 4.30pm.