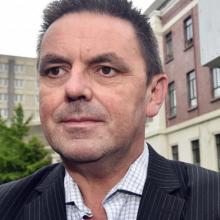 Chris Fleming.
Southern hospitals have once again delayed some elective operations and outpatient appointments due to industrial action.

Medical Imaging Technologists (MITs) who are members of the APEX union were due to stop work at 7am today, the first of two 24-hour strikes planned for this week.

The union, which represents 53 staff at Dunedin Hospital, 28 at Southland Hospital and eight at Lakes District Hospital, called this latest strike to highlight its ongoing dispute with DHBs nationwide over safe staffing levels, professional development and recognition of clinical responsibility.

Patients in a life threatening situation would still have access to the X-ray or scan if they needed one, SDHB chief executive Chris Fleming said.

"Patients coming to Emergency Departments who do not have a life threatening situation will be assessed and treated by medical staff, but may be required to come back at a later date to have a scan or be sent to a private radiology service for their X-ray or scan."

Patients would be contacted directly by the SDHB if their elective and outpatient procedures were to be postponed, Mr Fleming said.

MIT staff are scheduled to stop work again from 7am Wednesday to 7am Thursday.

"MITs are a vital part of our SDHB's health care team and a strike of this nature will again significantly impact on our ability to carry out our normal services for our community," Mr Fleming said.

"Our focus is on maintaining safe care for patients during the strike period, and we thank everyone for their understanding."

During the previous strike at least six requests for life-preserving imagery proceeded without issue, but a number of major surgeries which would have required X-rays afterwards were deferred.