The calls came as about 30 survivors, supporters and representatives from the Catholic Diocese of Dunedin - including Bishop Dooley - gathered on the steps of St Joseph's Cathedral yesterday.

They fell silent to remember victims of clerical abuse who had taken their own lives, then tied coloured ribbons to the cathedral gates to show support for survivors.

The ribbons came from across New Zealand and around the world, including from survivor and supporter groups in Australia and the United Kingdom.

One came from the widow of Richard Sipe, the former priest and psychotherapist who died earlier this year, who helped expose the clerical sexual abuse scandal in the United States.

Network of Survivors of Abuse in Faith-based Institutions and their Supporters spokesman Murray Heasley said the "paradox" was most victims at yesterday's gathering would be excluded from the Royal Commission under its draft terms of reference. 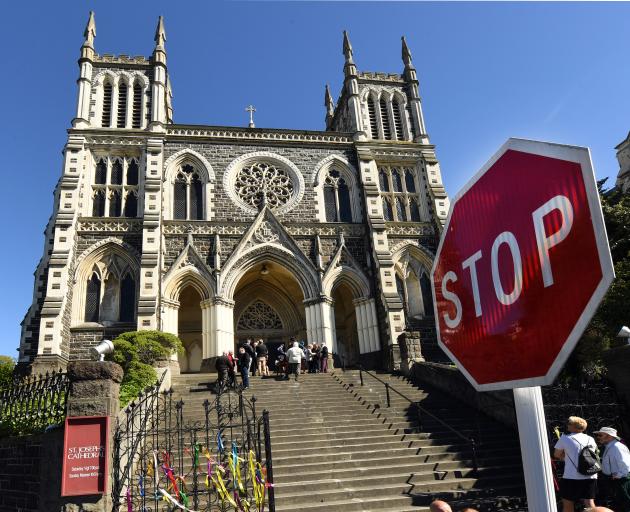 Abuse survivors, their supporters and representatives of the Catholic Diocese of Dunedin gather to tie ribbons of remembrance to the gates of St Joseph's Cathedral yesterday. PHOTO: STEPHEN JAQUIERY

His call to expand the inquiry so all victims' voices could be heard was endorsed by Bishop Dooley.

He told the gathering he was there to remember victims within the Dunedin diocese, who suffered "at the hands of those they should have been able to trust".

It fell to him, as the present Bishop of Dunedin, to "acknowledge that abuse happened".

But it also fell to the Government to expand the scope of the Royal Commission, he believed.

He reaffirmed his desire, and that of New Zealand's other Catholic bishops, to be part of an expanded inquiry, "so that we can be investigated, and to make sure this doesn't happen again".

"A parallel inquiry is not a good answer because it would lack credibility if we were investigating ourselves," he said afterwards.

Mr Cull, contacted after the event, also supported calls for an expanded inquiry.

"Any investigation into abuse in institutional care needs to be independent and comprehensive. It would be unrealistic to expect a church to objectively investigate itself.

"So including the church in the Royal Commission would be sensible and avoids having to repeat the process," he said.

Prime Minister Jacinda Ardern's office did not respond to a request for comment, while Internal Affairs Minister Tracey Martin would not comment on the gathering, or calls for an expanded inquiry, until after a final decision on the scope was made.

An announcement had been expected within "weeks" in August, but her spokesman could give no timeline yesterday.

The draft terms of reference limited the inquiry to a 50-year period, from 1950 to the end of 1999, and circumstances where the state directly ran institutions or outsourced care to non-state institutions.

That meant church-run schools would be included, but other faith-based settings for abuse - from a church presbytery to a priest's home visit - would be excluded.