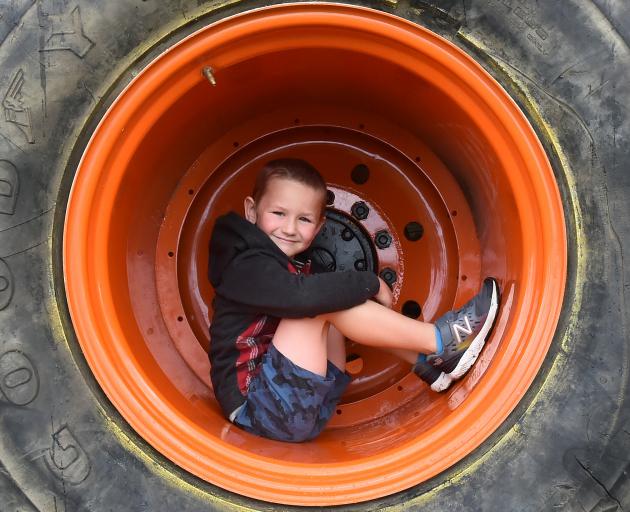 Mosgiel boy Byron Marshall-Sanders (5) curls up inside the wheel of the monster truck at the Mosgiel Party in the Park yesterday. PHOTO: GREGOR RICHARDSON
Hardy Mosgiel folk did not mind the rain at this year's Party in the Park, young and old enjoying the food, stalls and family entertainment on offer.

This weekend marked the second year the event has been held at Peter Johnstone Park, and co-organiser Regan Horrell was pleased with how the day had gone.

Hundreds of people were checking the event out late yesterday morning, despite the wet weather.

Among the attractions was a "kids' alley" series of activities, including a bouncy castle and motorbike riding, a line-up of musicians and entertainers, including locals such as 16-year-old Liam Boyne, and rock band Th'Leftovers, whose frontman was Mosgiel man James Mckewen.

The day also featured the Otago Museum's "Lab in a Box", which drew plenty of parents and children in, and helicopter joyrides, provided by Highland Helicopters.

"The whole event is very community-focused, bringing the community together. It's a good family day out," Mr Horrell said.

Holding the event in the park had been a good move, he said.

"It has huge potential to grow, year after year."

"Lab in a Box", run in conjunction with the University of Otago's Department of Physiology, included a virtual reality headset, allowing children to explore three different sites in the Antarctic, as well as a whole host of activities designed to educate children about the human body and teach them how to to look after themselves.

Otago Museum science outreach project co-ordinator Clarie Conconnan said the lab had recently been to schools in the Catlins, Invercargill and Balclutha.

"They love it [the VR component of the lab]; it just feels like you're there," she said.

Another hit for young children was a monster truck, and cars at the show included Maserati's Levante SUV, which was being promoted by Married at First Sight NZ contestant Dave McClelland.