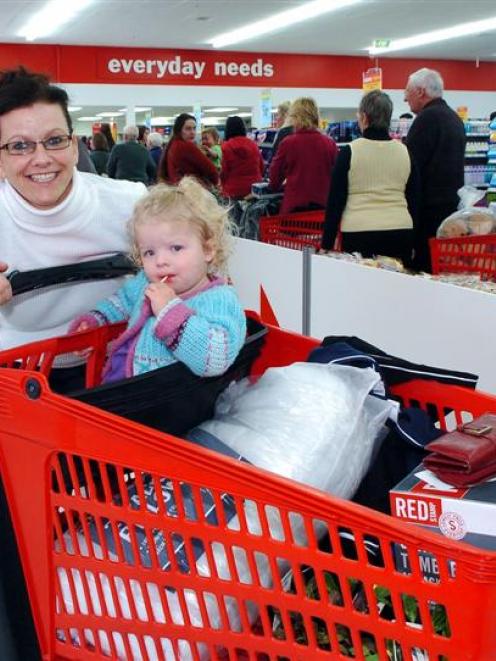 Later, lengthy queues within the store, pressure on its car parks and heavier-than-usual traffic in nearby streets, also testified to the popularity of the new facility.

The Warehouse local store manager Peter Ward, previously of Christchurch, said Mosgiel residents were excited about The Warehouse coming to their own backyard.

Twenty-eight people, 25 of them hired from the Dunedin area, will run the store.

Mosgiel had strong growth potential, and establishing a Warehouse outlet there was a vote of confidence in the area's future, Mr Morrice said in an interview.

This was the country's first smaller Warehouse concept store, and about three more a year would be opened in the next five years, he said.

The Mosgiel shop will offer a wide range of products and services, including toys, fashion and leisure items, home and garden products, DVDs and household goods.

Maree Darling, who was shopping with her 23 month-old daughter, Summer, said she was enjoying the specials, and the store was "handy for all sorts of things".

Another Mosgiel resident, Pauline Escott, who was buying a microwave oven, said the new shop was "going to be brilliant" and was a positive change for a building site which had previously become "a bit of an eyesore".

Mosgiel Business Association spokesman Graeme Downes said the store was a positive step which would encourage more Mosgiel people to shop locally, and also attract shoppers from nearby areas, such as Wakari and Green Island.