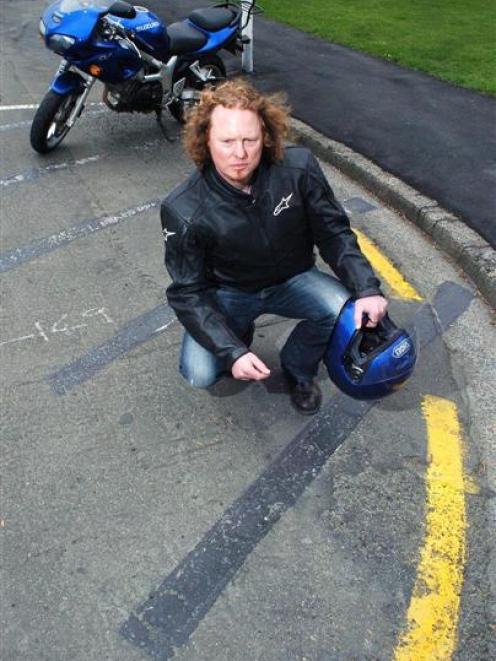 Natural History New Zealand post producer Mark Orton at a motorcycle park the Dunedin City Council is about to reinstate, following its review. Photo by Gerard O'Brien.
A Dunedin man has had his parking concerns answered instantly, but looks set to have to pay a ticket he received.

When he parked on the edge of an adjacent car park - and paid for the privilege - he was given a ticket because part of his tyre was on yellow lines.

Mr Orton asked why motorcycle parks had disappeared when oil prices had prompted a large increase in the number of motorbikes and scooters.

"If statistics are showing there are more scooters, where do they want us to park them?"

He also argued motorcycles should be encouraged as transport because of their lesser effect on the environment, and questioned where - if pay and display parks had to be used - riders were meant to place their parking receipt when they did not have a dashboard.

A Dunedin City Council response to his letter pointing that out said riders were advised to pay for parking, "and to hold on to their receipts so in the event that they do receive an infringement, they can provide us with proof that they have paid for their parking".

That was "quite baffling", Mr Orton said.

"Frankly, I have better things to do, like holding down a job, than to be marching down to the DCC with my proof of purchase every time I discover that I have been ticketed."

Council development services manager Kevin Thompson said when asked about the issue the council had already decided to put the park back - with three berths for better access - after its review of the changes and feedback received.

He said the park was taken out when the parking strategy was implemented, as it was considered there were enough motorcycle parks in the area, and "as part of the whole picture", they were not needed.

He could not get exact numbers, but said motorcycle parks had not decreased. He suggested Mr Orton should write him a letter about the issue, so it could be considered when another review was done after the end of the month.

It was a rider's responsibility to place a parking receipt where it could be seen, usually near the handlebars.

Up to six motorcycles could share a pay and display meter, and only one had to pay.

It was possible to park on a meter where someone else had already paid.