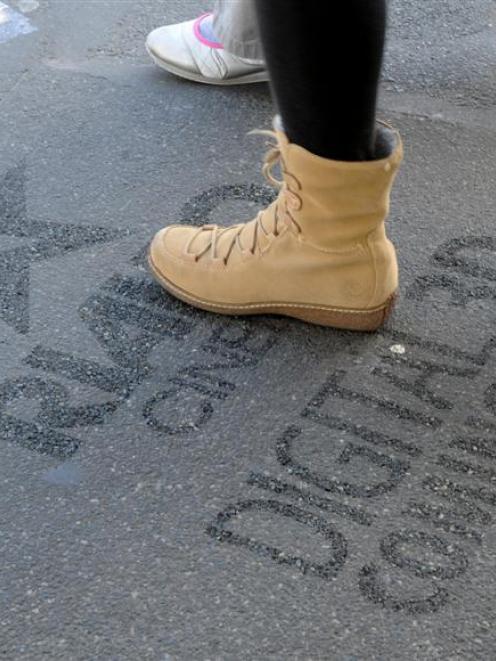 The ban will only target commercial messages, though, with non-commercial advertising subject to a new permit system.

The council's commercial use of footpath policy was introduced in 2005, and has to be reviewed under the Local Government Act.

A report on the issue from parking enforcement team leader Daphne Griffen said there had been a "significant increase" in signboards outside retail outlets, and cafe owners were putting more tables, chairs and other objects outside their businesses.

The review had more clearly defined what those objects were, and where they could not be placed.

Maximum heights for signs had been introduced, and banners and flags had been banned.

While the council was committed to supporting and enhancing local business and a vibrant and active street life, there "needs to be some control over the placement of objects on the footpaths to ensure there is always a safe and unobstructed passage for pedestrians of all abilities, and to ensure the visual amenity of our streetscapes is not detrimentally affected", the report said.

A trend had developed where businesses were advertising on footpaths using chalk, and more recently a stencil and water blaster to create temporary advertising images.

Council development services manager Kevin Thompson said if the council allowed footpath advertising with no restrictions, it could be used for every sale or promotion that was held, potentially resulting in damage to footpaths.

There would also be issues with how long it could be in place, with some markings "quite permanent".

"We're just taking a line on that," Mr Thompson said.

The company uses stencils and a water blaster to create temporary advertising images on the footpath.

Mr Thompson said that was non-commercial, and the company could still do such advertising if it had a permit.

Stencils advertising a movie theatre, which could be seen on Dunedin streets, would not be acceptable.

A company spokesman could not be reached late yesterday.

The report will go before the council planning and environment committee on Tuesday, and Mr Thompson said all affected retailers would be sent a letter advising them of the changes, so they could get involved in the consultation.