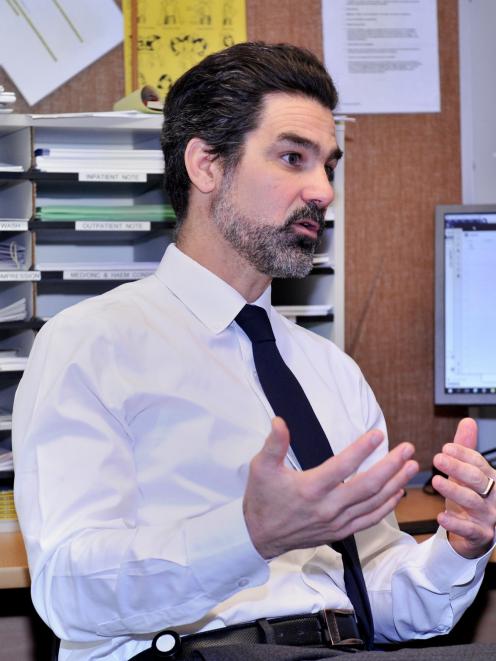 Dunedin Hospital radiation oncologist David Anderson. PHOTO: CHRISTINE O’CONNOR
It was revealed last week that cancer treatment at Dunedin Hospital was being held up because of a backlog of first specialist appointments. Health reporter Mike Houlahan asks what a first specialist appointment is, why they take so long, and why they are so important in the cancer treatment process.

Many things in cancer are precious, and so is radiation oncologist David Anderson’s time.

Dr Anderson and his Dunedin Hospital oncology service colleagues have their days, weeks and months scheduled to the minute, as they try to help as many patients as possible during their work days.

"It’s not a matter of Dr Anderson, you have 45 minutes free in your day so can you see Mrs Smith?" Dr Anderson, who was on call while speaking to the Otago Daily Times, said.

"When you look at it at the end of the week you go, well, I would have loved to have done more first specialist appointments (FSA) but the more FSAs you generate, an exponential amount of work comes out of that."

A recent Official Information Act request by the Otago Daily Times revealed how tight the margins are in the oncology service.

Documents showed on average 21 FSAs were done by hard working SDHB clinicians such as Dr Anderson each week, but demand projections showed it needed to be 22 — a shortfall of 52 people annually.

At other DHBs, each full-time senior medical officer would normally do five appointments a week, for 42 weeks a year.

Five does not seem like a large number of appointments, but a great deal more goes in to an FSA than the time spent with the patient.

"As part of a weekly work-load it is not just a single FSA," Dr Anderson said.

"We do a lot of clinical work behind the scenes beforehand and there are a lot of follow-ups afterwards ... the work generated from an FSA is the bulk of our work, and by far the majority of work from an FSA will go into planning radiotherapy."

Generally, a patient will have a diagnosis before an FSA, and the cancer team will already have met to discuss their case.

At the FSA, the clinician will explain what the diagnosis means, treatment options to be discussed, and for the patient and their family to ask questions.

An oncology FSA is not a simple procedural matter, it is often a discussion of a life-and-death situation and hence a stern test of a clinician’s bedside manner.

"Only in a minority of cases should you be breaking bad news," Dr Anderson said.

"You should be elaborating on a diagnosis and giving much more detail on what their prognosis may be ... all patients are different, not all them want all the facts.

"Some don’t want to be bombarded with information, others want to know as much as possible, but by far most of the time in an FSA is spent giving the patient knowledge of the cancer and information on treatment options, because often they have multiple options available to them.

"We explain the pros and cons so they can make an informed decision themselves."

Like most medical departments oncology runs a triage system to identify the most urgent cases, which typically are those treated first.

While cancer is a tricky disease and can surprise doctors, it is also a well-researched disease and clinicians have a fair idea how tumours will grow and at what pace.

"There are multiple subtypes of common cancers and we know that certain subtypes progress at a faster rate than others, we have this information from pathology reports," Dr Anderson said.

"We also have information from scans, so we can monitor the progression of the cancer over time, but it is heavily weighted towards what the pathology is."

Most treatment ordered will be curative, although for far-gone cases, palliative treatment will be offered.

Dr Anderson and his team see only a percentage of southern cancer patients, and they are all acutely aware of the waiting list of people hoping for treatment sooner rather than later.

"We need to recruit more people. Outsourcing to Christchurch or Wellington is only a short-term solution and it must be costing the DHB a great deal of money, I assume.

"It’s also not very pleasant for our patients to be travelling away from home for several weeks at a time, so we need to increase the resources we have in the service."

- The SDHB has been trying to recruit another radiation oncologist, as well as locum staff.

It has agreed a contract with Christchurch’s St George private hospital to treat up to 200 breast and prostate cancer patients, at a rate of about four people a week.

FSA chance to discuss all options for patient

What is a first specialist appointment?

A first specialist assessment (FSA) is an appointment with a specific member in the oncology service (a consultant, registrar, nurse practitioner or nurse specialists) to discuss the cancer diagnosis and what treatments might be appropriate.

Those could include chemotherapy, radiotherapy, hormonal treatment, and/or immune therapy.

Why do I need one?

"People need an FSA prior to starting specialised treatment because there are many options and some potential side effects to consider," Cancer Society medical director Chris Jackson said.

"Sometimes there are many treatments to choose between and a detailed discussion may be needed between the patient and a member of the oncology team.

"Sometimes there are treatments that are not funded by the DHB, or only available elsewhere, that need to be discussed so people are fully informed about their options."

What happens at an FSA?

The patient and team member will review the patient’s medical history, and the clinician might perform a physical examination or arrange further testing. They will talk through how far the cancer has spread, ways it could be treated, and the possible outcomes.

"There is time for patients and whanau to ask questions about their diagnosis, treatment, what the future might hold, and any other questions that people want to raise," Dr Jackson said.

How long does it take?

An FSA usually took between 40 and 60 minutes, but there was much more to the process than that, Dr Jackson said.

The responsible clinician had prepare for the meeting, communicate with other specialists in the cancer team, and then organise future treatment, tests and follow-ups.

Why is an FSA so important?

"People rightly want to know the extent and seriousness of their condition, what the impact might be, and what possible treatments there are," Dr Jackson said.

"Delays in time to FSA mean that people are left without information for longer, which is very distressing for conditions as serious as cancer.

"Sometimes delays can mean that people’s health can get worse while they are waiting for appointments, so it is important to keep any waits to an absolute minimum."

It's a crying shame that too many people with cancer are dying awaiting diagnosis or treatment. Surely there has to be a better way to attract the necessary health professionals to the Deep South. Our country has always been known for its ground breaking work in various professions including medicine so why hasn't the government implemented a scheme like eliminating student loans of teachers surgeons and medical professionals after a certain time of dedicating their service to the NZ public to attract more people to these professions?
A healthy educated society produces an affluent society after all and in the long run more health and education professionals would benefit Kiwis more than waiting 20 years for a student loan to be paid.
Incentives are needed for the long road to become a surgeon

I agree with Rukidding but we cannot accept the present situation because compared with elsewhere in this country much different outcomes occur and in saying this, it is not complaint of the clinicians but one at the governance level including Government. We simply can't be telling people "we are fill, go away" and see what happens to you. In a very recent murder accomplice case the judge states -“Proof of lawful blindness will be sufficient to prove knowledge,’’ he said.
"If someone deliberately shut their eyes to the obvious or refrained from enquiring because they think they know what the answer may be, it could also be proof of wilful knowledge". That, to me, is what those in governance are doing to those on waiting lists and those waiting to be on waiting lists. And they have to do something - not try to cram more into a full system but redirect elsewhere in the country and resourcing structures. Don't blind eye and also not record, don't say it is a money problem - "outside of funding model" but do something - for better outcomes do occur elsewhere in this nation and Southern is part of this nation of 5 million. Doing nothing but the same is guilty of "wilful blindness" .

With days to weeks max before my kidneys fail and my tongue cancer claims my life, i still, after months buried in the mouth of the beast that is cancer, do not understand what the system has gotten so horribly wrong thay I was left with no other choice than death, in spite of earlier supposedly successful treatment and frequent monitoring. Yet, here I am, most assuredly, a number in some grotesque SDHB spreadsheet.

The apologists are out in force!