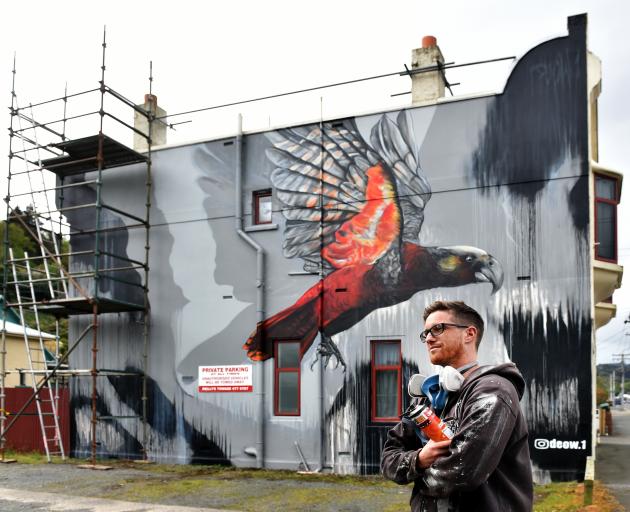 Artist Deow Owen, of Southland, after finishing his striking kaka mural on North Rd yesterday. PHOTO: PETER MCINTOSH
An 8m kaka mural which now graces a Northeast Valley wall will act as a symbol for residents trying to encourage the native birds to flock there.

The parrot image on North Rd was finished yesterday after four long days of painting by Southland artist Deow Owen.

Mr Owen said the creation process began in March and went through many designs.

The mural alludes to a project by the Orokonui Ecosanctuary, the University of Otago department of zoology and valley residents to create an urban ecosanctuary and eventually coax the birds back into the area.

The work was commissioned by a loose collection of artists known as the Northern Artery.

Group member Sue Marshall said the idea for making the entrance into the valley grander had been discussed for a long time.

``It's fantastic. We're very happy. It worked well because when we asked the owner of the place they said they were trying to find an artist to paint that wall anyway.''

The project was funded largely through events such as craft markets and cabarets.

``During the Resource Consent process, the artwork was considered to enliven a blank wall that was visible only by previous demolition. Similarly placed artworks have proven very successful in the city centre, adding surprising new elements to blank space.''