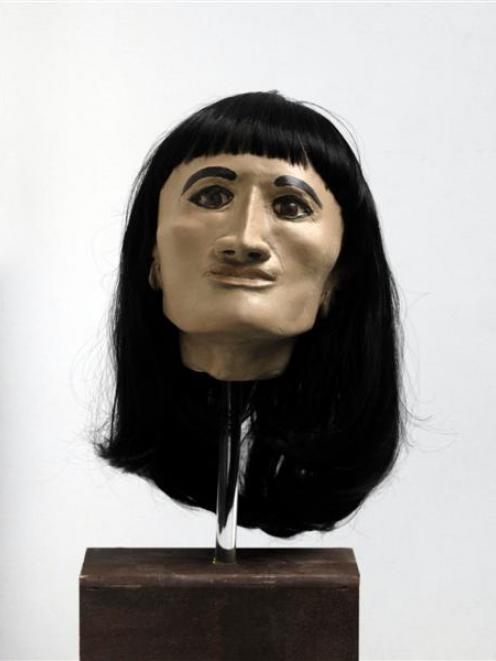 Created through the use of CT scans and computer technology, this model shows the face of a 2300-year-old Egyptian mummy, and reveals her to be unlike the image on her sarcophagus. Photo by Gerard O'Brien.
The face of the mummy has finally been revealed and found to be . . . well, fairly ordinary.

Fine cheek bones, a sharp nose, and a rather severe look - but a face that would not be out of place in Egypt today.

The mummy has been at the Otago Museum for 116 years. Before that, it spent 2300 years entombed in Egypt.

Yesterday, the team of museum and University of Otago staff that created a scientifically based, plaster representation of what she looked like while alive, unveiled their handiwork.

About 200 people saw the face of a 35-year-old, middle-class Egyptian woman with long dark hair.

She certainly looked nothing like Elizabeth Taylor, who played Cleopatra in the 1963 movie, or like the mask drawn on the outside of her sarcophagus.

Art historian Peter Entwisle explained that the woman died before the Greeks had begun to bring realist influences to Egyptian art.

He was impressed by the realism of the face.

"She looks like some of the people you see on the streets of Cairo."

Dr George Dias, who led the team that created the representation, was pleased with the result brought about through the use of CT scans and other computer technology.