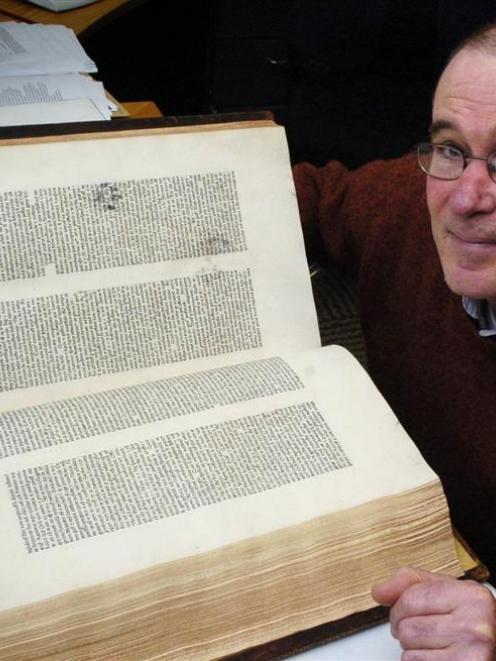 Two of the prints which adorn page 250 are smudged, but a third is quite distinct on top of the Latin text.

Dr Kerr said he was intrigued by the find.

"It's odd - a bit quirky. I wondered if the book had ever been used at all and if anyone else had ever seen them."

The book, a treatise dealing with the Ten Commandments, virtues and vices, questions of civil law and other matters, and subtitled Corpus Juris for convenience, was printed by German printer Johann Mentelin about 1472 or 1473.

He was a former illuminator of medieval manuscripts who, in 1458, turned his skills to the new technology of printing, using metal type.

Dr Kerr said his theory was Mentelin, who could produce 300 hand-printed sheets a day, laid his pages on benches or table tops to dry, where his cat had walked on one or more.

"Mentelin has been described as a 'careless printer' - perhaps this is why. But finding the cat prints does present a homely image of the printery."

The volume is known as an incunable - the collective name for books published between 1451 and 1501 when type printing was in its infancy.

The university owns 42 incunables and Dr Kerr was analysing them to compile a list of titles, contents and major features.

He said about 60 copies of the Astesanus de Asts Summa de casibus conscientiae were known to exist in libraries around the world.

He had emailed several libraries to see if their copies contained cat paw prints too, but while some inky smudges and fingerprints - presumably Mentelin's - had been found, nobody reported paw marks.

"There were some delightful email exchanges," he said.

"From Dr Falk Eisermann at the State Library of Berlin I received this: 'There seem to be no obvious traces of a black-footed cat running around on the sheets. If only a cat had been around. There is a bad damage on the first 30 leaves or so, clearly rodent nibblings, and also on the final leaves. Now we know why Johann M. kept a cat in the printing house'."