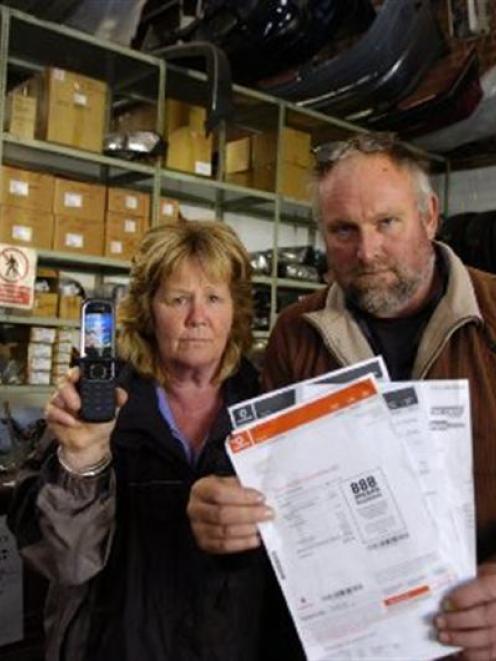 Adele and Geoff Stanger, owners of A1 Auto Wreckers, yesterday had a mobile bill of $959 waived after "banging their heads" for weeks with both Vodafone and the company that sold them the phone contract, Auckland-based Scoot Mobile.

Yesterday, after inquiries by the Otago Daily Times Vodafone waived the bill.

Vodafone Mobile business call centre team leader Jason Tan said Vodafone would investigate who made the calls and how the mixup happened.

Asked why Vodafone only waived the bill yesterday, he said the company had not realised how much difficulty the Stangers were having.

The manager at Scoot who dealt with the Stangers told the ODT he would not discuss the matter publicly.

The Stangers changed their business landline phone and business mobile to Vodafone in March, sold to them by a Scoot salesman from Auckland.

The contract came with a sweetener - a free connection and handset for a second business mobile.

They found the package satisfactory, except for issues with the second mobile as they started getting bills for calls, texts, and data usage they were not responsible for.

Initially, Mr Stanger had to chase Scoot for delivery of the phone and his first rental bill was for $65.

Three to four days later, they were shocked to receive a phone bill of $894, including $306 for texts and $261 for calls, which included calls to Australia and the Pacific Islands.

Only a very few calls were made by the Stangers.

Most of the calls and texts were made before the phone was delivered to the Dunedin couple.

Scoot provided a new handset and number this month because of the Stangers' concerns they could receive calls from unknown people, but despite numerous assurances it would sort out the bill, Scoot did not do so until yesterday, Mr Stanger said.

Both parties seemed to be "passing the buck", Mr Stanger said.

He was delighted the matter was resolved, as the couple were fearful for their credit rating.