When the sun rises on May 28 next year, North Dunedin will be filled with a cacophony of squawking and screeching.

For the first time, Dunedin will host the New Zealand Poultry, Pigeon and Cage Bird National Show (May 28-30), and more than 2000 birds from across the country are expected to flap into town.

"It’s an honour. It really is. Some of us members have been looking forward to holding a national show here in Dunedin for years."

The show will be held at the club’s Forester Park facility. 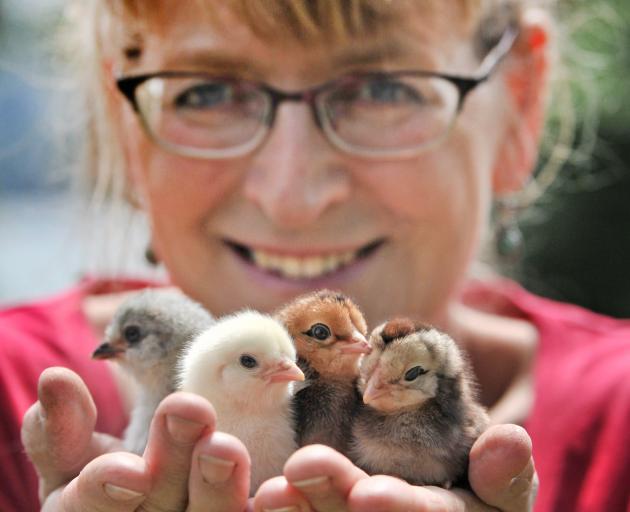 Stefanie Kalmakoff, of Portobello, with a handful of her one-day-old araucana chicks which she hopes to enter in the New Zealand Poultry, Pigeon and Cage Bird National Show in Dunedin, next year. PHOTO: CHRISTINE O’CONNOR
Mr Wilson said regional shows usually attracted up to 700 birds, but the estimated 2000 birds for the national show had prompted organisers to carefully consider the space needed to display them.

"If we have to make more entry space, we’ll probably have to go up — we’ll have to start stacking the cages," he said.

Because it would be the first time Dunedin had hosted the national show, he said organisers were already working hard to make sure it was "a beauty".

There would be plenty of social events to make sure the event was not all business and no play.

He said the social events would double as awards ceremonies.

About 190 national championship titles were up for grabs because of the diverse range of birds on show.

As a result, there would be several awards ceremony dinners held over the three-day event, to present the pecking order and prizes.

Mr Wilson was delighted members of the public would also be allowed to view the birds throughout the weekend.

And for those who fall in love with any of the poultry, pigeons or cage birds, organisers were planning to have an auction on the final day of the show, where pure-bred birds and show birds could be bought.