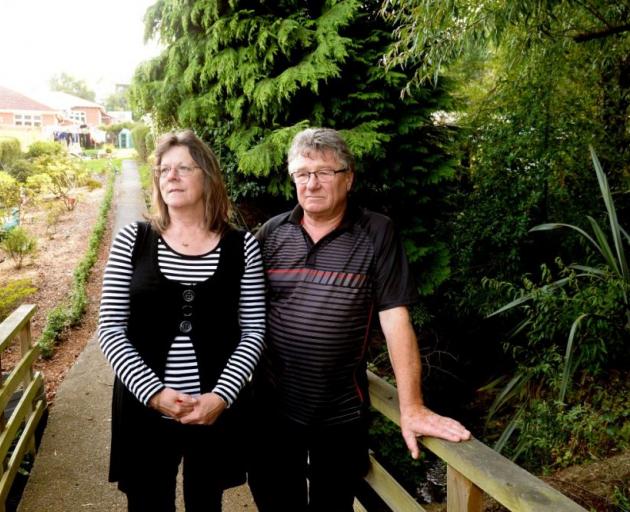 Kevin Rochford and Rose Bray’s plans are in limbo after a ‘‘laughable’’ payout offered by the Earthquake Commission. Photo by Linda Robertson

After all, he lives next door to Mr Hall and faced the same flood damage as his neighbour during last year's flood - water through his garage, damage to his access bridge and land stripped away.

And, just like Mr Hall, Mr Rochford is still fighting for compensation from the Earthquake Commission (EQC), nine months after the event.

An assessor had put the cost of remediating the damage to Mr Rochford's property at $44,000 in the days following the flood.

Mr Rochford had expected the full cost of the ‘‘act of God'' would be covered, but EQC had instead offered an ‘‘almost laughable'' sum of just $8000, he said.

Mr Rochford said he was fortunate his bridge was made of concrete, and could be repaired.

But EQC would only treat his bridge as land, and cover the cost per square metre lost, or the cost of repairs, whichever was less.

Mr Rochford was still consulting his lawyer, and yet to accept EQC's offer, although he was at pains to point out EQC staff had been ‘‘lovely''.

It was the formula they applied that appeared to be broken, making the process ‘‘quite stressful'', he said.

‘‘Not only has it taken a very long time, but the outcome is such that we're left with a ‘what do we do?'

‘‘It's frustrating and it's quite scary. Where do we go from here?''

The settlement amount was based on the cost of repairs, or the value of damaged land, including covered structures, whichever was less.

Customers were encouraged to talk directly to their claims manager ‘‘if they have concerns''.