Neuro art on the brain 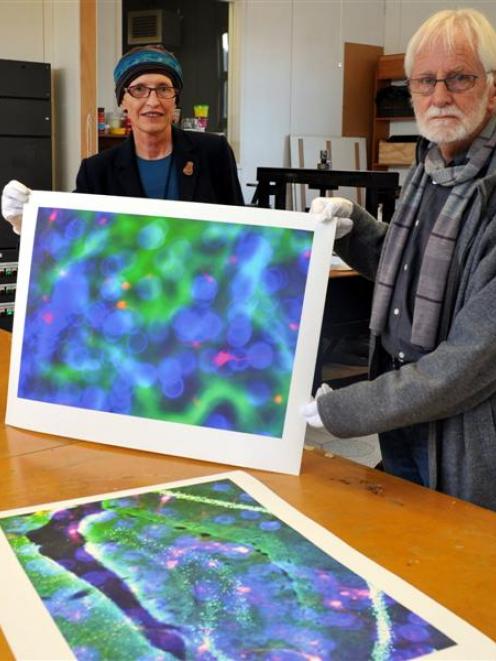 Dr Ruth Napper, of the University of Otago, and Peter Stupples, from the Dunedin School of Art, display prints, depicting brain cells, by Kristin Peren and Marion Wassenaar. Photo by Craig Baxter.
The organiser of a Dunedin art exhibition showing off the wonder of what goes on in the human brain hopes it will help dispel the myth that science and art are polar opposites.

The ''Art and Neuroscience Project'' exhibition, set to open next month, is a collaboration between scientists from the University of Otago and artists from the Dunedin School of Art.

As part of the project, 17 artists from the school of art have met 15 neuroscientists from the university and created artworks inspired by their research.

Dr Ruth Napper, from the Department of Anatomy, came up with the project after taking a printmaking night class and seeing how intrigued fellow class members were by with images of brain cells.

''I explained that they were cells from the brain and what they did and it was interesting to see somebody who knew nothing about that react, and it just made me think: `I wonder what an artist would actually do with that'.''

She and Peter Stupples, from the Dunedin School of Art, then got together to organise the exhibition, with staff and students from the school of art volunteering to take part.

Dr Napper hoped the exhibition would get people interested in science and also show that scientists had a creative side.

''There is an image of a scientist often as being somebody who probably isn't interested in art or can't communicate with anyone except for another scientist.''

''I see the way scientists think about things as being very creative and very lateral,'' she said.

Mr Stupples said the artists had enjoyed the challenge of creating art inspired by science, with each artist interpreting the science in very different ways.

Among the art media the 17 artists involved in the project had worked in were printmaking, paint and sculpture.

The exhibition opens at Otago University's Hunter Centre on July 19 and runs until August 2.