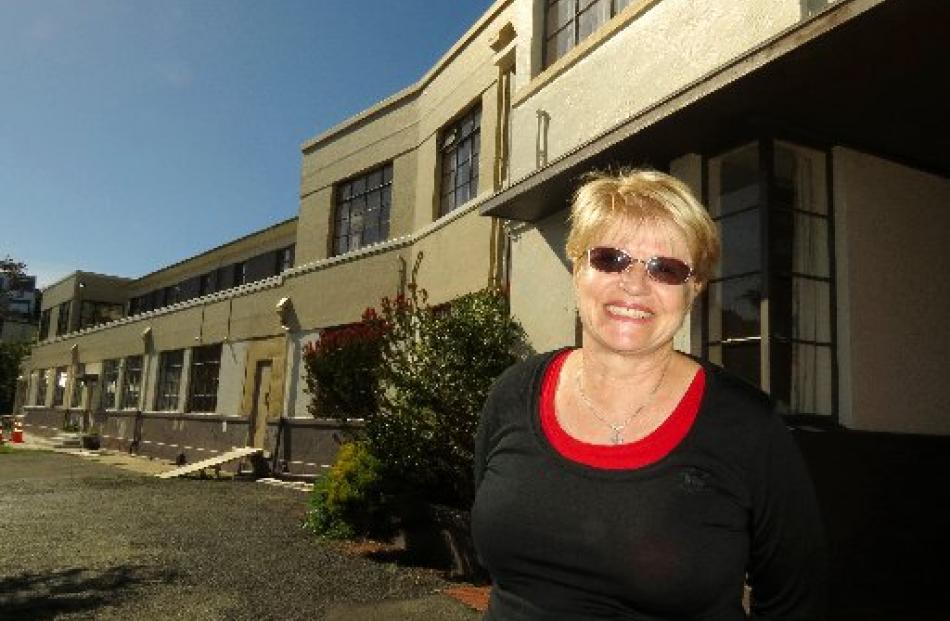 Lucia Rogers is all smiles as her dream of creating an apartment complex with a difference takes place inside the former Truby King Harris Hospital. Photo: Dan Hutchinson

The former Karitane Home for Babies - built in 1938 - is itself being reborn and has also been entered on the New Zealand Heritage List/Rarangi Korero as a Category 1 historic place.

The former Truby King Harris Hospital in Every St has been undergoing a major interior transformation by its new owners Lucia and Kevin Rogers - who have their own plans to provide a nurturing place for people to live.

The modernist Dunedin building is the second Karitane hospital to be built on the site - replacing the first one in New Zealand - built there in 1910 by Truby King, who founded the Plunket Society in Dunedin in 1907.

The hospital closed in 1978 and was then used as a rest-home and backpacker accommodation before lying empty for 18 months before the Rogers bought it. Mrs Rogers said the exterior of the building would remain exactly the same and even the box hedges and the varieties of plants originally put there by Mrs King would be retained or replanted on the grounds.

The interior was being converted into nine apartments (equal numbers of one, two and three-bedroom dwellings) and were being built to a high standard.

In fact the only apartment that might not get fully renovated is the Rogers' own one - being left until last while they focus on the income-earning apartments.

''At the rate the money's gushing out it might not happen. We will wait and see. But that is all right - it has been a great adventure for us.''

They took on the massive conversion project just over two years ago and spent more than a year gaining planning permission and designing the apartments before work began.

When they took over the building, 18 months of being empty had already taken its toll with rain having seeped into the roof along with other unwanted intrusions.

''People were sneaking in and having parties in here.''

Mrs Rogers said she had done four years of research relating to loneliness and was looking for a place where she could create an environment where people were not living in isolation.

There is a community garden, community laundry, a huge community room with a theatre and a massive commercial kitchen left over from the rest-home that previously occupied the building - all available for common use.

They have already put the community facilities to good use with birthdays and movie nights.

The remaining three apartments should be finished by the end of the year and the landscaping would be an ongoing project, Mrs Rogers said.