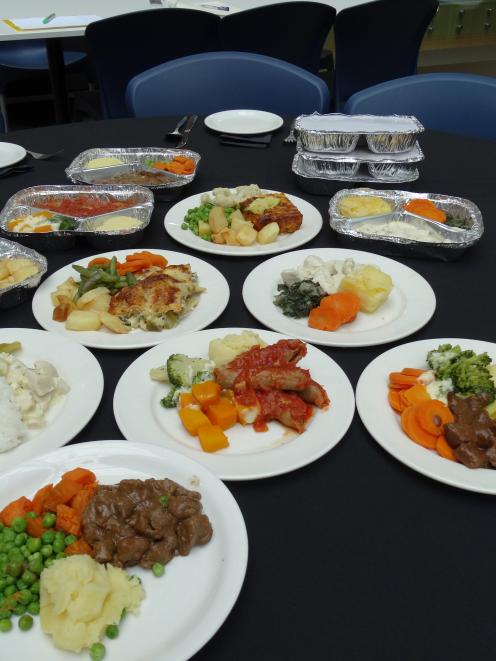 A selection of Compass’ meals on wheels food was tasted by The Star in February. Since then five dishes have been removed and changes have been made to some vegetables.
Southern District Health Board meals on wheels recipients in Dunedin and Invercargill will be the first to test new Compass meals in about five weeks.

Compass took over preparation of the subsidised meals for the board at the end of January and, amid a flurry of cancellations and concerns about the meals' quality, undertook a review of all dishes and introduced additional quality checks.

The new menu options were based on popular feedback and customer requests and were undergoing lengthy testing, which included tastings, food safety tests, temperature trials and other quality checks, she said.

All menu changes also required approval by a committee including dietitians from several district health boards to ensure they met Ministry of Health nutrition standards for older adults.

In the meantime changes have been made to some side dishes, including scalloped potato which had been made "creamier, softer and more flavoursome''.

Fresh vegetables were always used unless a particular vegetable was not available seasonally, such as peas or beans.

The introduction of new meal containers had been delayed because the containers first trialled were too fragile but other more suitable options were now being tested. The new containers would be usable in both microwave and standard ovens.

Age Concern chief executive Susan Davidson said the numbers of people receiving meals appeared to have "settled'' after the large drop earlier in the year. Some of the volunteer drivers who had delivered meals on wheels previously had chosen to retire from the service because there was not enough work for them.

The organisation has a pool of about 600 volunteers for the work, but some are rostered infrequently. In a typical year they would deliver about 43,000 meals.

Some drivers were delivering Home of Barnabas Trust meals but that was "challenging'' for some, as the containers used were heavier than those used for the Compass meals, she said.

A further 20 meals on wheels clients in Dunedin cancelled their Southern District Health Board-subsidised meals in April, bringing the number of cancellations since mid-January to 109.

In Invercargill, where the same service is provided through Compass, the rate of complaints is considerably lower - only two cancellations last month, lifting the total to eight.

At the end of April, 96 people received the service in Dunedin and 63 in Invercargill.

In an emailed response to questions, SDHB chief executive Carole Heatly said meal recipients moved on and off the service daily for a variety of reasons.

These could include moving away from the area, being admitted to residential care, death of the patient, the patient no longer requiring the service or no longer wishing to receive it.

The board continued to work closely with Compass on monitoring and responding to feedback about the meals.