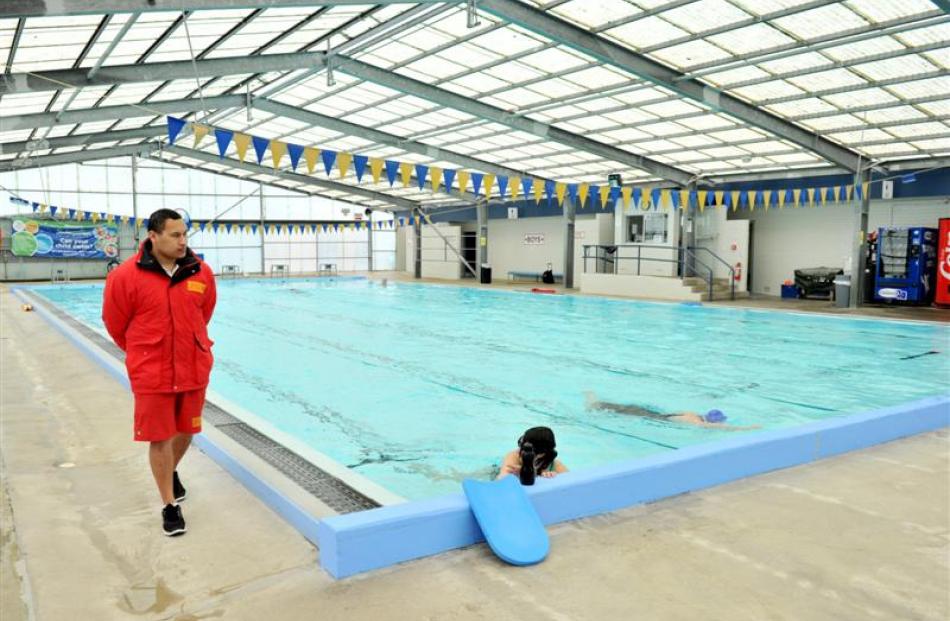 The ageing Mosgiel pool under the watchful eye of supervisor Punua Tangimetua. Photo by Linda Robertson.

The word on the street is the people of Mosgiel want a new pool, an informal poll of residents has revealed.

The poll follows a suggestion there was little community interest in it.

The Taieri Times asked 50 people on Gordon Rd last week whether they wanted a new pool, and if they did, if they would be happy to contribute financially to its construction.

Respondents to the non-scientific vox pop were generally enthusiastic about getting a new pool.

Many people referred to the Forsyth Barr Stadium when saying they would be happy to contribute money towards a new pool.

''If we have to pay for that, I have no issue paying a bit more for a pool,'' said one.

''I'd much rather we contributed to [a pool] than that great big money gobbler in town,'' said another.

Even older people who said they did not use the pool were supportive and said they would contribute a little.

''I just hope they get on with it now,'' one older woman said.

Many poll respondents said it desperately needed to be upgraded.

Although it is unclear what sort of pool might be developed and, therefore, how much might need to be raised by the community or could be contributed by the council, people said they would be happy to pay extra on their rates for it.

One woman even volunteered herself and her staff to work on any trust established to help raise funds.

While the results of the unofficial poll are not likely to come as a surprise to community leaders and residents, given a relatively long history of local agitation for a pool, the response appears to be at odds with comments from community board member Maurice Prendergast, who recently said in the Otago Daily Times he had seen or heard no evidence of anyone wanting a new pool in Mosgiel, other than the other members of his board.

When contacted, Mr Prendergast said he thought the Taieri Times vox pop was too broad and, without any actual costs in, too general to give a real feel on what people would want.

''If you ask anyone if they want something, of course they will say yes.''

He felt that if people were asked if they were happy to have a specific amount added to their rates bill each year, they would give a different response.

Even if the response then was still a positive one from Mosgiel ratepayers, he believed the rest of Dunedin's residents were unlikely to be supportive.

He reiterated that he was not against a new pool per se, just the council getting into more debt.

The council is to consult the public early next month, as part of its annual budget-setting exercise, on whether there is community support for its suggestion the Mosgiel community set up a trust to drive the project.

The council would provide $30,000 to the trust in the next financial year to investigate the establishment, ownership and operation of a new pool.

Mosgiel Taieri Community Board chairman Bill Feather said it was great to hear people were indeed so enthusiastic, although he was not surprised, as the community had made it clear for many years the old pool needed to be replaced.

The board recently met to discuss the council's recommendation at a workshop.

It was possible an existing charitable trust could be used for the project, although that would be discussed further at the board's March 11 meeting in Outram.

He said he had had several indications of interest from people who wanted to be involved with the project.

There was a lot to be decided yet, but, as discussed at the board's last meeting, it planned to have a special focus on the pool when consulting in Mosgiel on the council's draft 2014-15 budget.

Specific places and times would be set so people would know where they could offer their views.