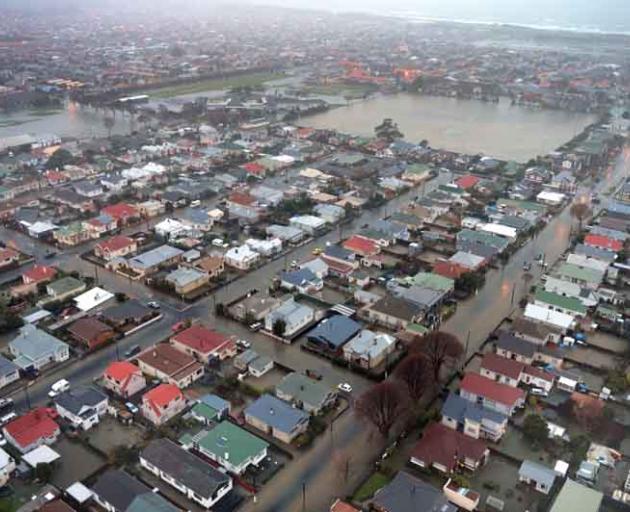 South Dunedin was hit hard by the flooding in June 2015. Photo: ODT files
New houses will either be banned or made more difficult to build in the most flood-prone parts of Dunedin, and developers eyeing South Dunedin have been told to prepare for a climate change evacuation.

The changes are among new rules for natural hazards released this week as part of the Dunedin City Council's finalised second-generation district plan (2GP).

The new rules meant large swathes of the city are now covered by a tiered, three-level system of flood, land instability and coastal hazard zones, which place new controls over development in each area.

The new rules would make it "quite difficult" to obtain resource consent to build a new home in those areas, he said.

A new Hazard 1A (flood) zone had also been added, covering many of the spillways and ponding areas of the lower Taieri flood protection scheme, which prohibited new homes altogether.

Mr Freeland said the flood protection scheme was designed to flood in heavy rainfall events, and it made sense to prohibit new homes in the area.

There were a "handful" of rural homes within the zone, mainly on the periphery, and they would not be forced out, he said.

They could also be permitted to make small additions to improve their quality of life, which were not seen as increasing the risk, Mr Freeland said.

But new homes, potentially placing more people in harm's way, would not be permitted.

"They would have to go through a plan change [process], so it's not taken lightly. It's the toughest we can make it," he said.

And in areas covered by the coastal hazard 3 overlay, new homes would have to be designed to be relocated in future, given the risk of inundation from sea level rise, he said.

That affected South Dunedin and coastal communities such as Aramoana, and covered any new building with residential activity on the ground floor, he said.

"It's really warning people that they are in an area where, over time, they may need to move because of sea level rise."

It was possible new defences against sea level rise would be developed, avoiding the need to relocate houses, "but it does really depend on the response".

"At this stage, we think it's prudent to put people on notice, basically."

Concerns the new rules could impact property values was understandable, but a 2015 government report had underscored the risks posed by sea level rise.

"Places like South Dunedin are fairly and squarely ... in that report. It's not like it's a secret or anything," Mr Freeland said.

An earlier requirement to set minimum floor levels for new buildings had also been removed from the 2GP, and would instead be administered by the council under the Building Act, as would earthworks requirements.