If you are struggling to find a fresh Christmas tree this holiday season it may not be your fault.

The culprits are a herd of deer that have made Santa’s naughty list this year.

John Munro usually has hundreds of trees to sell at his Kaikorai Valley Christmas tree farm, but this year he sold 42. 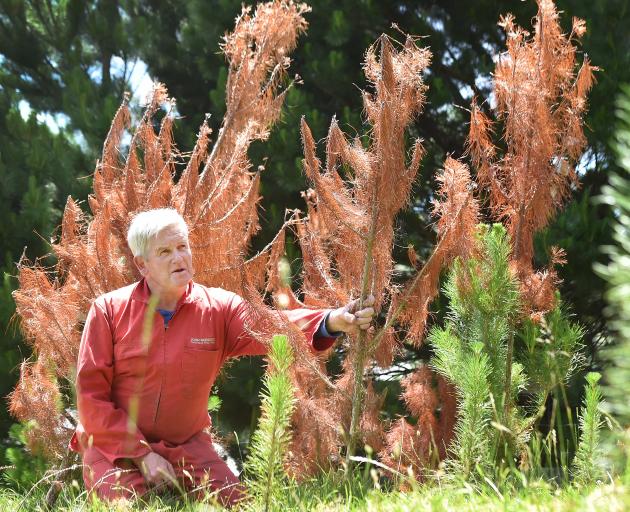 Kneeling beside a cluster of trees killed by his herd of deer is Christmas tree farmer John Munro yesterday. PHOTO: PETER MCINTOSH

That is because his herd of deer broke into his plantation and destroyed almost all of his trees.

It was the worst year of business since he started the tree farm in 1991.

Last year, the deer had pushed through the fence and eaten the bark around the base of the trees, causing them to die slowly.

The deer were only in there for about a week, but that was long enough to eat the bark of almost every tree.

Some of the trees still looked green and healthy, but in reality were ruined and would not last nearly as long as a healthy tree.

The herd had plenty of grass to eat but enjoyed eating the bark.

He was "fuming" when he saw the damage they had done. 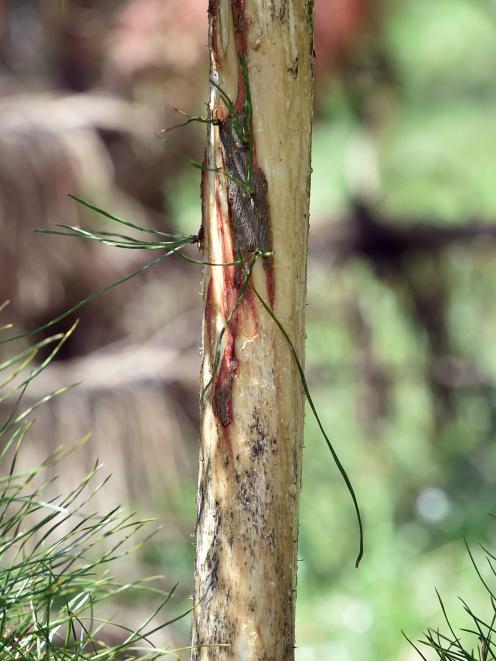 The deer have eaten away the bark at the base of the trees. PHOTO: PETER MCINTOSH

He enjoyed having the deer and liked to keep them near the trees so children could enjoy feeding the "reindeer" when their parents came to pick up a tree.

Although the small herd of fallow deer were not quite the same breed as those that pulled Santa’s sleigh, the children still loved them.

Unfortunately, he would have to get rid of them, he said.

It took about four and a-half years to grow a small Christmas tree and more than seven for a large tree.

The damage done by the herd would have serious long-lasting effects.

There was no easy or quick fix although he did have some trees coming through for next year.

Since becoming a fulltime real estate agent he had had less time to work on the trees.

It took a lot of effort to grow a nicely shaped tree and it was "gutting" to see that effort go to waste.

Moana House programme manager Claire Aitken said it had finished with Christmas trees for the year.