No soft-soaping for these coal protesters 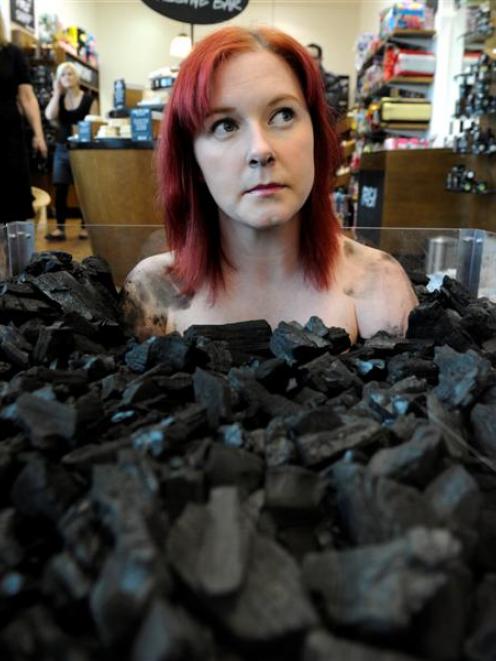 Trainee-manager Rebecca Whitburn (28), from the shop Lush, in Wall Street mall, sat immersed in 125kg of charcoal to protest against the coal's effects on climate change.

Dunedin Lush manager Karen Thomas said an employee was buried in all 11 Lush shops across New Zealand at midday.

The campaign used charcoal for the demonstration because coal was too heavy.

A store-petition, "keep the coal in the hole", called for no new, or expanded coal mines, such as Southland lignite, or the Denniston opencast mine proposed for the West Coast.

The petition asked the government to move away from fossil-fuels, like coal, and move towards renewable energy options, such as solar or wind.

Energy Efficiency and Conservation Authority adviser Chris McArthur said large coal-burning companies could apply for a 40% grant, up to $20,000, for a feasibility study to switch from fossil fuel to bioenergy, like wood.

A company was generally considered large if it spent $250,000 a year on energy, Mr McArthur said.

Wood energy was a viable, cost-effective heat source, he said.

The first round for feasibility grants closes on November 18.