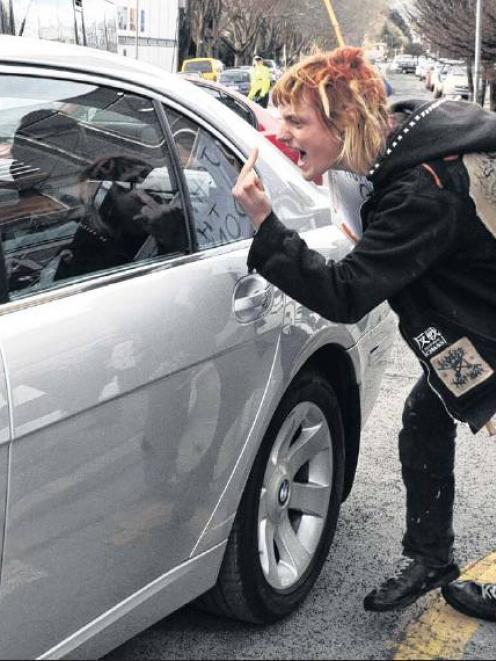 The rowdy reception from the more than 300 placard-waving and chanting protesters did not deter a relaxed Mr Key, who later accepted an "I love OUSA" T-shirt from student representatives inside the library.

The Bill, which had been stuck in procedural limbo because of delaying tactics by Opposition parties, came up for debate in Parliament on Wednesday - a move that was earlier than expected and upset student associations.

Mr Key acknowledged the "boisterous and warm welcome" he received.

The Robertson Library, which has been refurbished by the university at a cost of $10 million, was another example of the positive, university-inspired progress being made in Dunedin, Mr Key said.

"This university, in my view, is world-class. You are doing an outstanding job and this new development, alongside the [Forsyth Barr] stadium, are examples which speak volumes about the exciting progress, future and heart of Dunedin."

Police had moved to contain the crowd when Mr Key arrived, as protesters surged forward across Union St, but one rogue protester managed to get up close as Mr Key left the area.

Mr Key ignored the protesters during the visit and told the Otago Daily Times he would not meet the demonstrators.

"I don't think I'll talk to them, but we are happy to have to listen to their case and cause."

The impending legislation that the protesters were demonstrating against was "not our Bill, but we are supporting it", Mr Key said.

OUSA has been at the forefront of a nationwide campaign against the move to voluntary student membership, because it says it will undermine and cut existing student support services.

Mr Key said the Government would implement a levy, which universities could then use to secure fees from students to continue to fund existing association facilities and campus services.

He likened student associations to unions.

"From a tertiary perspective, this is the only sector in New Zealand's economy, at the moment, where unionism, for the most part, is compulsory. We want to put the education sector on the same footing as the rest of the country," he said.

Dunedin police said there was no issue with the behaviour of the protesters, describing the action as an "orderly demonstration".