Not a good look: Cull 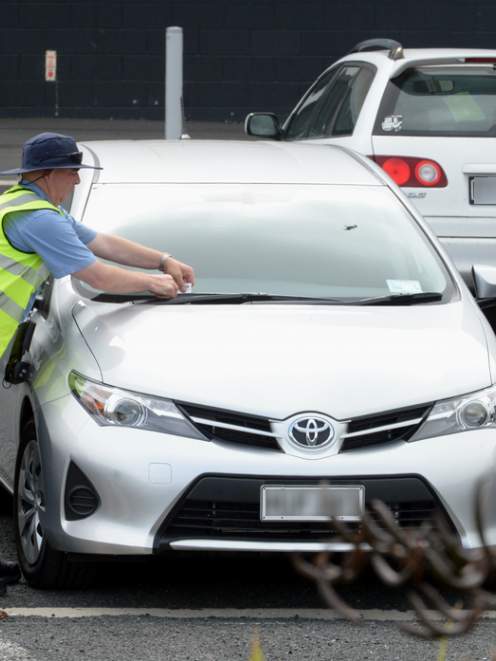 Mr Cull said the practice of stinging overstaying motorists at Forsyth Barr Stadium with $65 fines - called ''breach notices'' by the company - was ''not a good look'' for the city or the council.

As a result, council chief executive Dr Sue Bidrose would be asked to review existing arrangements at the stadium ''and what options council might have'', Mr Cull said.

That could include seeking a legal opinion, following claims this week the fees being charged by Wilson Parking were unlawful, he confirmed.

His comments came after the ODT on Wednesday reported a Dunedin woman's angry reaction to a $65 ticket, charged for being just 11 minutes over time at the Wilson Parking-managed stadium car park.

The Otago Daily Times was flooded with dozens of similar complaints yesterday from members of the public unhappy at their treatment by Wilson Parking.

Mr Cull said the company's ''punitive regime'' did not reflect well on the the council or the city.

''I don't think it's a great look for a council-owned facility to be run in a way that makes it pretty obvious that the penalties are a bit exorbitant and unreasonable.

''I don't think it's appropriate for the stadium to have that kind of punitive regime in place on council property, and I wonder if there are alternatives which don't cost us a fortune,'' he said.

A Wilson Parking spokeswoman declined to respond to ODT questions yesterday, but on Wednesday insisted the company's actions were ''completely compliant''.

''The company does not issue `fines'.

''The breach notice fee is an agreed term of the parking contract.''

The company has 20 car parks across Dunedin.

In 2011, the council opted to lease its only profit-making parking building - the former YMCA building in upper Moray Pl - to the company in a deal worth about $400,000 a year to the council.

That was $166,200 a year more than when previously managed by the DCC, and included a condition preventing Wilson Parking from raising hourly parking fees.

The building used a barrier arm system, rather than pay-and-display, so the $65 penalty charges were not applied.

Wilson Parking had also, since 2012, managed for the council a newly-established car park at 20 Parry St, with a 50-50 income sharing agreement worth $3000 a year to the council.

A $65 penalty charge was applied at the car park, but that was to change when management of the park reverted to the council this weekend, council city property manager Kevin Taylor said.

In 2013, DVML announced it had contracted Wilson Parking to manage the nearly 300 parking spaces on the eastern side of the stadium.

The deal was expected to generate a ''significant sum of money'', DVML staff said at the time, but exact details were not divulged.

The deal came as public pressure mounted on DVML to secure additional revenue, to offset ratepayers' losses from the stadium's financial difficulties.

DVML chief executive Terry Davies was not available yesterday, but his spokeswoman said the contract with Wilson Parking was due for review at the end of the year.

DVML received a monthly management fee from Wilson Parking, but details could not be divulged.

''I can tell you we don't get any percentage of their so-called fines,'' she said.

Mr Cull said there was not ''necessarily anything wrong'' with the council, or DVML, contracting out parking services to a private company, if it generated an improved income stream in return.

However, it was ''unreasonable'' to apply such high penalties when those using the stadium car park were attending events somebody else had paid DVML to put on, he believed.

''I appreciate there is an income stream out of it for DVML and we're all well aware of their need to maintain any income stream they can get - but at what price?''

It's a council-owned facility, and if there's a function there and you're going to it, and presumably someone has paid for the venue, I think it's unreasonable to subject your guests ... to those kinds of exorbitant penalties.