Not her type, but they ended up wed 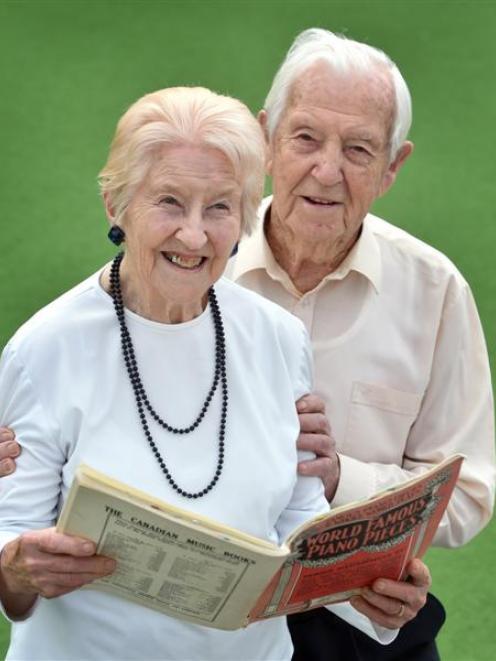 Lorna and Ernie Nightingale celebrate their 65th wedding anniversary at the Summerset at Bishopscourt Retirement Village in Dunedin yesterday. Photo by Peter McIntosh.
When Lorna McDonald met Ernie Nightingale at the Dunedin College of Education in 1947, she told a friend he was not her type.

It is fair to say, then, she did not predict he would be her husband for 65 years.

''The first night Lorna was at college, I took her home from a dance,'' Mr Nightingale said.

''When she met up with her roommate at St Margaret's student hostel, the roommate asked, 'how is he?'''

She said, 'he's all right, but he's not really my type', so I've been trying since then to find what her type is.''

The couple celebrated their 65th wedding anniversary with friends at the Summerset at Bishopscourt Retirement Village in Dunedin yesterday.

They wed at Columba Presbyterian Church in Oamaru on August 19, 1950.

Mr Nightingale said the secret to their long marriage was that they had both common and individual interests.

Raising four children had been a common interest, while Mr Nightingale played sport and was involved in teachers' unions and his wife was an accomplished pianist, he said.

Mr Nightingale started his teaching career as physical education adviser for the Ashburton area, then went on to become deputy principal at Oamaru South Primary School and principal at Portobello, Ravensbourne and Corstorphine primary schools.

Mrs Nightingale taught at Papakaio, Chertsey and Corstorphine primary schools and was a relief teacher for the Dunedin College of Education's music department.

Mr Nightingale was a member of the New Zealand Educational Institute (NZEI) union for 10 years and served as national president for a year.

The couple was based in Wellington for that year and travelled to Papua New Guinea, Japan, Singapore and Brazil for union conferences.

The couple would celebrate its milestone with family at the retirement village on Saturday, Mr Nightingale said.