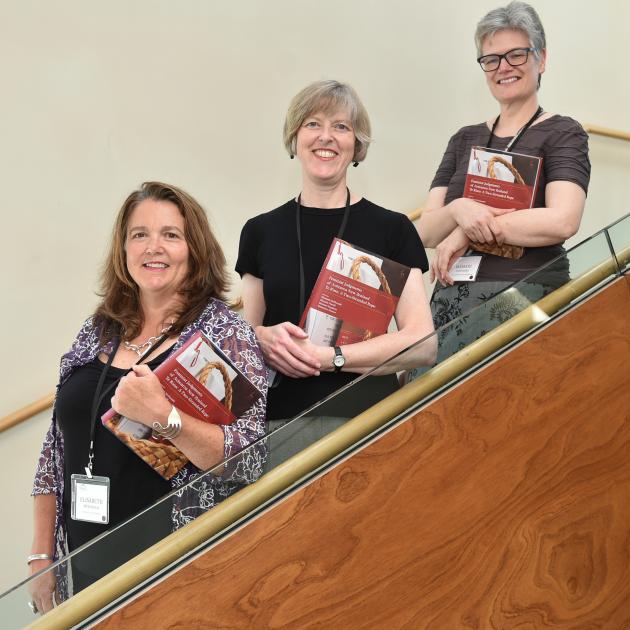 Launching Feminist Judgments of Aotearoa New Zealand — Te Rino: A Two-Stranded Rope are (from left) Elisabeth McDonald (University of Canterbury), Rosemary Hunter (Queen Mary University of London) and Mamari Stephens (Victoria University). Photo: Gregor Richardson
A book launched in Dunedin last night takes an age-old legal question — would we have got a different result with a different judge? — to a new level.

Feminist Judgments of Aotearoa New Zealand — Te Rino: A Two-Stranded Rope takes 25 judgements by New Zealand courts and sees them rewritten from the perspective of a feminist judge or a Maori female judge.

"A feminist judgement tries to be more inclusive, particularly of women’s experiences, or think about the way in which law is gendered and trying to counter that traditional exclusion that women have," Rosemary Hunter, of Queen Mary University of London, said.

Prof Hunter, along with  Elisabeth McDonald and Rhonda Powell (both of the University of Canterbury) and Mamari Stephens (Victoria University), edited the book, which was launched last night at the Law and Society Association of Australia and New Zealand conference, which concludes today.

The cases are drawn from across the legal spectrum, from obvious areas of law such as relationship property, sexual offences, social welfare access and family relationships, to less likely areas such as land law and environmental law. Cases range from 1914 to three 2015 judgements — one of which is the Lucretia Seales euthanasia case.

Each case is accompanied by legal commentary: more than 60 academics took part in the project, many from the University of Otago.

The New Zealand volume is unique in that one author is retired Family Court judge John Adams, who rewrote a 2002 judgement.

Feminist judgement volumes have been produced in England, Australia and Northern Ireland, and similar volumes are under way for Scottish and African cases.

"Part of the idea there was to look at the judgements and find ways in which tikanga Maori could be expressed or alluded to or utilised," Ms Stephens said.

Oh Dear. Reframing our justice system through the distorted lens of identity politics is a real concern if these mental exercises become codified. This should be totally rejected. It is only a matter of time before shades of Sharia law or Muslim cultural concerns are 'suggested' for the general justice system. Studies in western nations have shown that women are treated far more leniently than their male counterparts in terms of the same background and same crime. Check for yourself. When it comes to the Court room, I believe one law for all...and I'm saying this as some one who identifies as Maori. Unfortunately the current narrative tends to view women and Maori criminals as victims and thus some times enabling a culture of abuse.